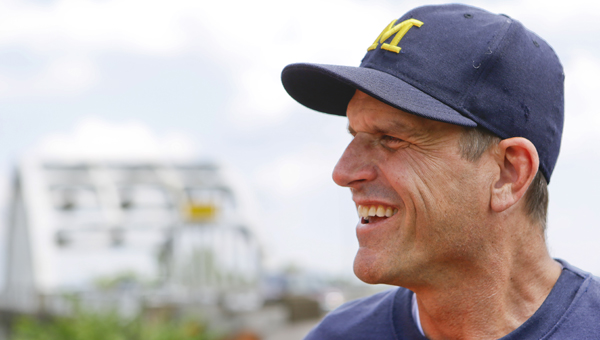 University of Michigan head football coach Jim Harbaugh took a few minutes away from the football field Friday to make a brief stop in Selma.

The first year Wolverines coach walked across the Edmund Pettus Bridge with a small group of assistant Michigan coaches. They were in Prattville Friday as part of a satellite camp tour that will take him all across the country in the upcoming days, but following the camp they made the 45 minute drive to the Queen City.

Wearing a Michigan sweatshirt and hat, he listened intently as Jerria Martin, who served as his unofficial tour guide for the day, told him about the history of Selma and the Bloody Sunday march.

“It was a powerful part of change for our country and just to be able to be here and meet some people that affected that change and understand what they were up against and what their courage had to be like, what their vision [was] and ultimately understand their success was something I thought I could learn from and draw inspiration from and I did,” Harbaugh said. “I’m glad that we’re here.”

Martin, who is the director of Circle of Hope Ministries, served as a guest lecturer at the University of Michigan earlier this year with David Turnley, a close friend who is a professor at the university. When Turnley told her they’d be in Prattville today, she asked them to make a stop in Selma.

“Even though I’m a diehard Roll Tide fan, it gives me great joy to show our city to this group of just awesome folk, who are here not only to witness history and our historic past but to learn about our hopeful future,” Martin said.

Not only did Harbaugh ask Martin about the history, but he also asked about the city’s school system, the city’s job situation and other topics.

“He was really concerned about Selma,” Martin said. “I think it just goes to show that people are concerned about our city. It’s our job to be advocates for our city, and we have to make sure they are getting the right information and not misinformation.”

Harbaugh said it was a great opportunity not only for himself but for his assistant coaches, including his son Jay, to learn about the history that happened in Selma.

“I was alive when this happened,” Harbaugh said in a reference to the Selma to Montgomery Marches in 1965. “I was only 3-years-old, but I was alive. Therefore I think when history happens when you were alive when it happened there’s a connection to it, so to be able to learn the power that it has is very moving.”

He spent the early part of his day at the skills camp at Prattville High School, where he participated in a shirts versus skins game.

Even though he said he’d had a couple of “Roll Tides” and “War Eagles” yelled his way, he said he was enjoying his stop in SEC country.

“It’s all good; it’s all good. My priorities in the North are faith, family and football and I know that’s what they are here,” Harbaugh said. “I have a real connection to all the people that I’ve met and I feel at home here. I really, really do. There’s so many things I love about it. The people and the hospitality have been at the top of the list. That’s been No. 1. Good down to earth genuine, good people. I’m happy here and I’m enjoying myself immensely.”