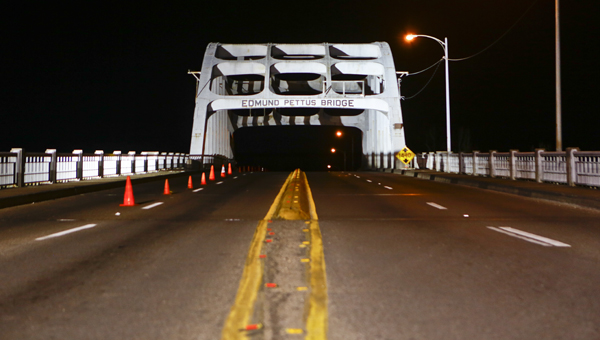 The House of Representatives will not vote on a resolution to rename the Edmund Pettus Bridge. –File Photo

The Alabama House of Representatives will not vote on a resolution to rename the historic Edmund Pettus Bridge.

The decision was made after Representative Mac McCutcheon, the chairman of the Rules Committee, spoke to a majority of the members of the House late Wednesday night and early Thursday morning.

“I went around and got a consensus of the house members, and based upon their feelings, they felt like this was a historical landmark in the state of Alabama, and members said they would not support this,” McCutcheon said.

The Senate introduced and voted to pass the resolution early Wednesday, which requests the bridge to be renamed the Journey to Freedom Bridge.

After news broke of the Senate passing the resolution, McCutcheon’s office started receiving phone calls that were not in favor of the resolution.

“Every call that we’ve received is in favor for keeping the bridge as it is,” McCutcheon said.

McCutcheon, who sets the schedule for the House, wanted to get an idea of what the majority thought before putting the resolution on the floor.

“My first priority when we saw the resolution was to see what was the consensus of the body in the House, and of course I began to get a lot of no votes,” McCutcheon said. “As the evening continued I continued to talk to members, and overwhelmingly they were not in support of it.”

McCutcheon also had questions about the state’s authority to change the name of a National Historic Landmark and a property that is on the National Register of Historic Places.

“The other issue that we’re dealing with here is that there may be an issue with the law in the fact that only the federal government can actually make that change,” McCutcheon said early Thursday.

According to Victoria Stauffenberg, a spokeswoman for the National Park Service, the property owner, which is the state, has the final say in renaming a location that is a national landmark or on the register.

“A property owner can always make changes to a property, including changing the name, which may or may not have an impact on its designation status,” Stauffenberg said Wednesday.

Rep. Darrio Melton said Thursday that he is not in favor of renaming the bridge.

“I understand the historical irony of the bridge being named after a former U.S. Senator, member of the Confederate and Klan leader, but what was birthed on that bridge has become a world symbol of Democracy and the Voting Rights Movement, and that is a beautiful testimony,” Melton said.

“We have no choice but to embrace, not erase, our history and heritage as a city. While the bridge carries memories of division, it also holds promises of hope and freedom. Currently it symbolizes our opportunity to move into the future with a new perspective of inclusion. There is no reason to hastily change what has become the cradle of Democracy.”

Congresswoman Terri Sewell reaffirmed her stance Thursday against the name being changed.

“I am strongly opposed to changing the name of the Edmund Pettus Bridge. The historical irony is an integral part of the complicated history of Selma – a city known for its pivotal role in Civil War and the civil rights movement,” Sewell said.

“The bridge is an iconic symbol of the struggle for voting rights in America, and its name is as significant as its imposing structure. Changing the name of the bridge would change the course of history and compromise the historical integrity of the voting rights movement. As inheritors of the legacy surrounding the historical events that took place in Selma, we must safeguard that history–good and bad and resist attempts to rewrite it.”

Sanders said he had hoped the House would vote on it, but he thinks more discussion about the name change will come from the Senate passing the resolution.

“I certainly wish that the House had taken it up and passed it because I think it needs to be done; however, I think that all is not lost,” Sanders said. “We have intensified the discussion, and I think this discussion will continue, and I think that eventually the name will be changed. I think that people have to come to understand the power of symbols.”