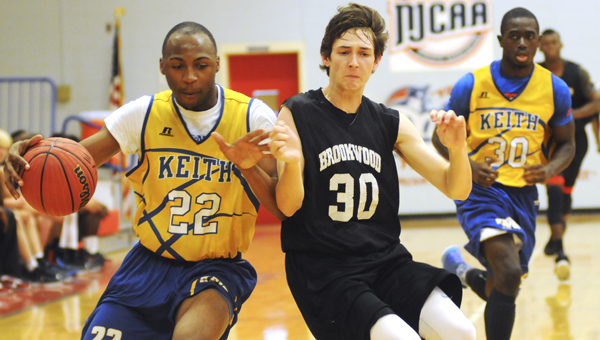 Keith’s Devion Johnson gets tangled up with a Brookwood player during Tuesday’s playdate at Wallace Community College Selma. The Bears defeated Brookwood 47-10 in one of their two wins on the day.–Daniel Evans

Keith’s first basketball game of the summer didn’t end quite the way the Bears hoped. Tied with Fairfield with 14.5 seconds left, Keith called timeout to draw up a play.

There was only one problem: the Bears were out of timeouts.

“The rules weren’t really ironed out as it comes to timeouts,” said Keith head coach Tommy Tisdale. “I didn’t discuss the timeout situation with the guys, not thinking that would come into play.”

Luckily for the Bears, summer is the time to work out those kinds of issues. The Bears didn’t cut it as close in their next two games. Keith rolled over Brookwood 47-10 and through Greene County 42-33.

“We’ve got good leadership,” Tisdale said. “We aren’t big in numbers but the few we’ve got they understand what we are trying to do. As a team, we played well together. I thought overall it was a productive day. I thought we got better from the first game to the last game.”

Bears’ rising senior John Pettway showed off his array of skills. Against Fairfield he scored the team’s first eight points and he showed throughout the day why he’s been recruited by several Division I schools.

However, Tisdale said Tuesday was also about finding out who else could step up on the Bears. With a double digit lead dwindling in the final minutes against Greene County, Tisdale kept Pettway on the bench.

The Bears showed they are more than capable. Keith held Greene County at bay and held on for a nine-point win.

The next challenge is for the team to continue to develop. The Bears play at Southside’s playdate Tuesday.