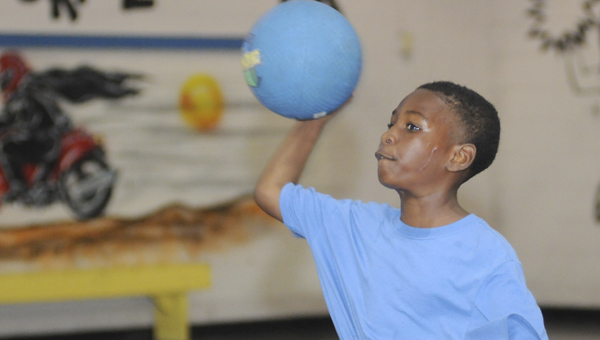 Kendarious Acoff fires a ball during a dodgeball contest Monday at the Selma PALcenter. About 50 youth were on hand for the first day of the center’s summer program.–Daniel Evans

Youth of all ages spent their Monday playing dodgeball and basketball as the Selma Police Athletic League held the first day of its summer program.

The program, which lasts through Aug. 6, runs every week during the summer on Mondays-Thursdays from 9 a.m. until 3 p.m. It costs only $25 per month for a child to attend and most importantly keeps them busy and interacting with others instead of having nothing to do.

“If you’re out here, we know where you are. That’s my important thing — if they are here, they aren’t outside,” said Det. Dorothy Cowan, who has been with the PAL program since it started 15 years ago.

The program starts each morning with an enrichment element. Cowan said this summer PAL will likely use the Gang Resistance Education and Training program (GREAT), which will take place for an hour each session.

Following that will be a lunch provided through the school system’s free lunch program and then the afternoon time will be reserved for sports.

The athletics portion of the program will center around the PAL program’s summer basketball league, which will be formed by placing each child into age groups.

Cowan said based on Monday’s turnout there are probably enough youth for three teams in three different age groups.

At the end of the summer, the PAL Center will host a basketball tournament where three champions will be determined.

Cowan said the program is bigger than just playing basketball though. It’s about giving area children something to do in the summer instead of wandering around town getting into trouble.

“If you walk the street now and go out to the marketplace, the mall or wherever you are going to see some of them in stores doing something or out there by themselves unsupervised doing things with their friends that they wouldn’t normally do if they were with a grownup,” Cowan said.

Like any other program involving children, it takes special people to run the PAL program. Cowan said it’s all worth it, especially when a child has made it through the program and comes back to help out.

“They have been here since they were in the sixth and seventh grade so they graduate and then they come back.”

The program costs $25 per month during the summer but includes lunch each day. For more information on the program, call 874-5596.