Search on for ring owner 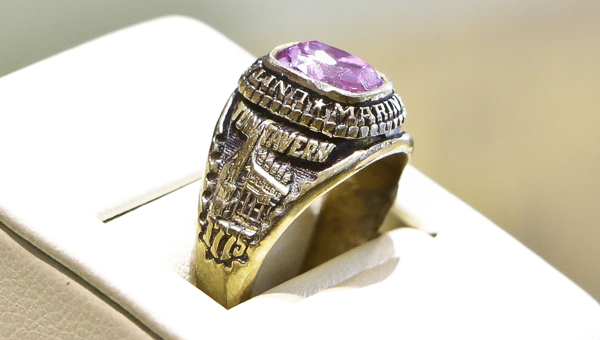 An employee at Butler Truax Jewelers is trying to find the owner of this ring, which has been restored.–Blake Deshazo

There’s an old saying that says finders keepers, but an employee at Butler Truax Jewelers is trying to locate the owner of a ring that was discovered in the street by a customer.

Christine Grandison, who has worked at the store since August, thinks the ring once belonged to a Marine because of the engravings on the sides.

On one side there is an engraved picture of Iwo Jima, where a major World War II battle was fought in 1945. The other side has an engraving of “Tun Tavern,” which was the birthplace of the U.S. Marine Corps in Philadelphia in 1775. A pink tourmaline stone rests in the middle of the ring, which also has engravings on the inside.

Grandison said a customer came into the store a few weeks ago with a ring he found on Broad Street.

“A customer brought the ring in and was trying to sell it or to make sure it was real,” Grandison said. “Apparently, he didn’t get what he wanted for it, so he gave it to me and told me I could have it.”

Grandison said the ring was in pretty bad shape when she got a hold of it, but she wanted to get it fixed and find its owner.

“It was all bent up like somebody had run over it,” Grandison said. “So I got my co-worker, Andrew [Truax], to straighten it out because he is a jeweler. He straightened it out, and we were able to see the wording on [the ring].”

Truax was able to straighten the ring out and get it back into wearable condition, but it also made the ring easier to identify.

“My first thought was that it couldn’t be straightened out because it was bent up so bad,” Grandison said. “The only thing that was not harmed was the stone that was in there. Our jeweler looked at it and said he would do the best he could, and he did an awesome job.”

Grandison wanted to return the ring back to its owner before Memorial Day because the ring seemed to belong to a Marine.

“I was trying to get it out by Memorial Day, so I talked to Wayne Sharpe at the radio station, and he said he would run ads for it,” Grandison said. “Unfortunately, nobody came forward before then.”

Grandison has been in the jewelry business for more than 20 years, and she has never had someone just find a ring and bring it in.

“I’ve never had anything like this happen, but I knew that the ring had sentimental value to it because of the year,” Grandison said. “I do want the owner to have it back because there was a war going on, and I don’t know if the person that owns the ring is still alive, or if it was passed on to someone else, but either or, I want them to have it back.”

Even though no one has claimed the ring yet, Grandison still hopes to see someone walk through the doors of Butler Truax and claim what was lost.

“I know if it was me, I would want someone to return it to me,” Grandison said. “I hope the owner comes forward and claims their ring. Somebody took the time to have all of the engraving done on the inside as well as the outside, so I am sure it is quite sentimental to someone.”

For more information on the ring or to claim it, call Butler Truax Jewelers at 874-4616.