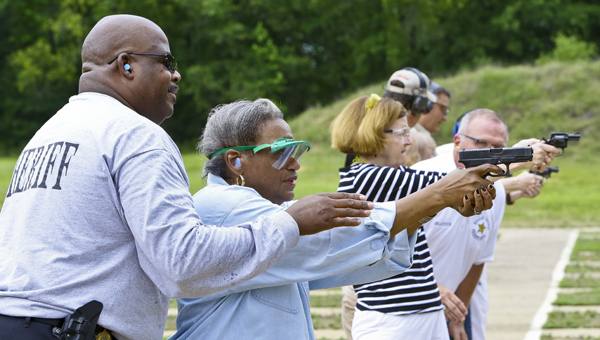 After a few hours of going over safety precautions and tips, 23 participants in Thursday’s gun safety class took to the firing rang at the FOP Lodge on Highway 80 to shoot their guns and see first-hand what it’s like to fire their weapon.

The gun familiarization and safety class was put on by the Dallas County Sheriff’s Department to help residents get a better understanding of their firearm.

“We try to do one in the spring, early summer and one in the fall depending on the weather,” said Captain Mike Granthum with the Dallas County Sheriff’s Department. “We go over proper techniques on how to shoot, safety rules, how to store a gun, gun laws, pistol permits — we go over all that kind of stuff.”

Anyone 21 and older with a valid Alabama pistol permit was allowed to take part in the class, but first time gun owners made up the majority of participants.

“We have some people in there that’s never handled a gun before,” Granthum said. “The reason that we do it, is we’ve just seen an influx in people getting permits. … It was just an outcry from the public. People, they’re buying guns and they want to be safe with them.”

Granthum said the class wasn’t about making people sharpshooters; it was about getting them to learn how to properly handle their gun. Participants had the opportunity to fire their weapon with one on one instruction from four different professionals.

Larry Spicer took part in the class and afterwards and said he was very glad that he did.

“This is the first time I’ve had this safety type class,” Spicer said. “I decided to take the class to make sure I know how to be safe [with a 9mm] and how to actually fire it, and to learn some of the laws and rules concerning the use of weapons.”

Spicer said the class was very informative, and he felt that he took a lot away from the day.

“It’s been outstanding for me. I’ve learned the importance of having a permit to carry your weapon,” he said. “I recommend everybody to take it that owns a weapon.”

For Kimberly Jones, Thursday’s class was the first time she had ever fired a gun.

“I have never actually fired a weapon [before], never held a gun, so it was time. … My husband just wanted me to learn how to use it,” Jones said. “[The instructors] are so full of knowledge. I now know the difference between a revolver and a semiautomatic weapon.”

Jones said shooting the gun for the first time was “absolutely terrifying” although she felt much better after the fact.

“I wasn’t expecting so much power to be in something so small,” she said.“I think in my mind, I made it out to be a lot scarier thing than it really is, so I’m glad I had this opportunity to familiarize myself with a weapon.”