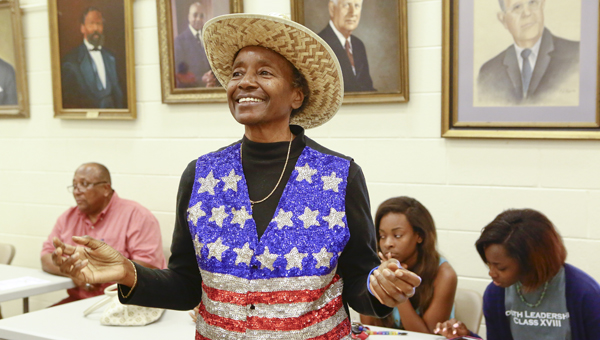 Rachel Tabb dances as part of a workout routine Wednesday at the senior’s day program at the Carl C. Morgan Convention Center. An estimated 250 or more seniors made their way to the event. –Alaina Denean Deshazo

Senior citizens in the Black Belt region had a good time Wednesday as they got together to celebrate National Older Americans Month at the Selma Carl C. Morgan Convention Center.

An estimated 250 or more seniors made their way to the event where they got to see old friends, learn new information and even dance their way to good exercise.

The seniors had a day full of activities and listened to a few different people speak about ways to properly use social media, health care tips and simple ways to exercise, which they demonstrated during the day.The Cooperative Extension System and the Alabama Tombigbee Area Agency on Aging partnered together to do this program.

“It is a conference where we bring seniors from all the surrounding Black Belt counties together, to provide them with education information as it pertains to seniors, but to also have some fun times,” Nelson said. “The focus this year is on being focused and being active and getting good health information.”

One participant, and a vendor at the program, said she enjoyed the speakers and activities throughout the day.

“I think it’s a wonderful experience. It’s a time where seniors can get together and all be on one accord,” said Evelyn Cox, 77, participant and vendor with the Retired Senior Volunteer Program in Southwest Alabama. “It’s an excellent program, plus it’s Older American [Month] and it’s just great for the seniors to understand that there’s someone that still cares about them, they have not just been kicked aside and pushed aside.”

Cox was dancing along during the exercise portion of the program and said it was a great experience for her and the other participants.

“I like the exercise, … just moving because everybody seemed like they got a chance to take part in it,” Cox said.

She also said that there was a lot of good information about medication and fraud protection along with social media use.

“We are not familiar with social media like the young people, and we’re learning, so we need to be informed and know what to do and what not to do,” Cox said.

Nelson said the day turned out well and that she hopes that the seniors had a good experience as well.

“A lot of times, we think about seniors and they’ve worked and they’ve given to society, they’ve helped us become who we are as young people and it’s just an opportunity to show them that we still appreciate them,” Nelson said. “It’s about educating them, but also at the same time bringing them together to share with each other in some of the activities that they do and understand that there are a lot of things that they can still be very active in.”