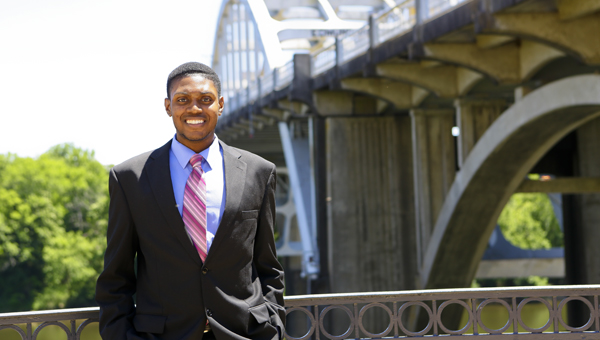 Matthew Smith III graduated as valedictorian at Selma High School. He didn’t get official word about the honor until the day of graduation.

Anticipation was building for Matthew Smith III last week when he woke up on graduation day not completely certain if he would graduate as Selma High School’s valedictorian or not.

“I didn’t get the official ‘you’re the valedictorian’ until the day of,” Smith said. “It was exciting [to find out].”

With a 4.21 grade point average and the determination to accomplish anything, it was no surprise to his mom, Brenda Smith, that he would be number one.

“Even when we go on trips, it may be for the weekend, and he’s got that big book bag on his back,” Brenda said. “There’s no words to say how proud I am of him.”

But on the day he walked across the stage in front of hundreds of people in the crowd, there was one person missing that he knew wanted to be there.

“My dad, he recently passed. He had been disabled for about 10 years after he was injured, disabled by a house fire in 2005,” Matthew said. “Some of the things that he wasn’t able to do — I feel that I can do them just to represent him.”

Matthew is the son of Brenda and the late Matthew Smith II. He was involved in many activities during his time at Selma High School including the National Honor Society, Future Business Leaders of America, choir and many more. He plans to attend the University of Alabama at Birmingham to study accounting and eventually would like to run for mayor of Selma.

“I’m looking forward to learning new things, seeing myself grow and develop into a new person because college tends to have that effect on people,” Matthew said. “Also, just gaining knowledge and becoming even more sociable than I am now.”

Brenda said she remembers after his father was burned in the fire, Matthew would go to the hospital to see his dad, and he would do school work, always staying on top of what he had to do to be the best in his class.

“[Matthew’s dad’s] first year that he got burned, we did homework at the hospital at UAB. He stayed at UAB for six months [and then an extended five months],” Brenda said. “I can remember the days that [Matthew] would bring that book bag and spread it out.”

Matthew said it’s singing that has helped get him through some of the toughest days.

“Singing is my passion,” Matthew said. “I feel that singing is like my therapy. It helps provide an escape. It’s soothing and I also feel like it can benefit me, the singer, and the audience as well.”

His mom agreed, and said through everything, Matthew has been strong for his family and has been an inspiration for all of them.

“Through it all, [Matthew has] been our shoulder to lean on,” Brenda said. “I admire so much about him. When we see him, we’re like we can’t help but be strong.”

Matthew’s father passed only a couple of weeks before his graduation ceremony, and Brenda said that was the one thing that he wanted to be there for.

“The only thing that [Matthew’s dad] was trying to do was to hold out until graduation day,” Brenda said. “But that Friday before he passed, he did tell me that, ‘I don’t think I can hold out, but I don’t want Matthew to know. I want him to keep that beautiful smile that he has.’”

But even without his dad there, Matthew said he knows that his accomplishments would make his father proud, and he plans to continue to strive for the best and live for his dad.