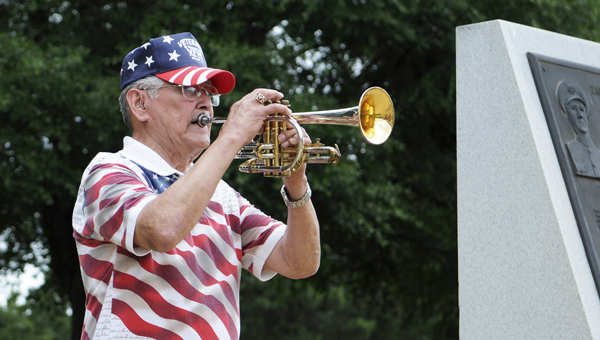 By DEREK THOMPSON | The Selma Times-Journal

For many Americans, Memorial Day has come to represent the unofficial start of summer with beach vacations, barbecue and three-day weekends.

The Veterans of Foreign Wars Post 3016 made it their duty to remind residents in Selma of the real meaning behind Memorial Day by hosting a ceremony Monday in honor of veterans who have made the ultimate sacrifice.

American flags were handed to the spectators surrounding the war monument dedicated to local fallen servicemen outside Memorial Stadium.

The crowd watched intently as wreaths and flowers were placed at the foot of the monument and dark clouds filled the sky.

Rayburn Hill, senior vice commander of VFW Post 3016, was the Master of Ceremonies and said the servicemen who gave their lives are the reason Americans are free today and able to enjoy themselves on a day like Monday.

Mayor George Evans spoke of the great sacrifices that the Marines, soldiers and sailors have endured for the country’s freedom.

Third-year trustee James Sharbutt said this is a day of remembrance and servicemen like him think about the ones that he’s lost often.

After concluding the ceremony by playing “Taps” on his trumpet near the monument, Army veteran Jesse Sanchez said taking freedom for granted is the biggest mistake any human being can make.

“I’ve seen so many things that happened since World War II,” Sanchez said. “Since then I have felt that a Memorial Day service is one of the only ways we can honor our fallen brotherhood that has fought so hard and paid the ultimate price to keep us from becoming a third world country as we have seen in other countries. I think that we should do everything we possibly can to honor those who have gone before us and paid the ultimate price. Some have come back still paying that price with loss of limbs and emotional problems. I think this is about the best thing that we can do for all our fallen brothers.”