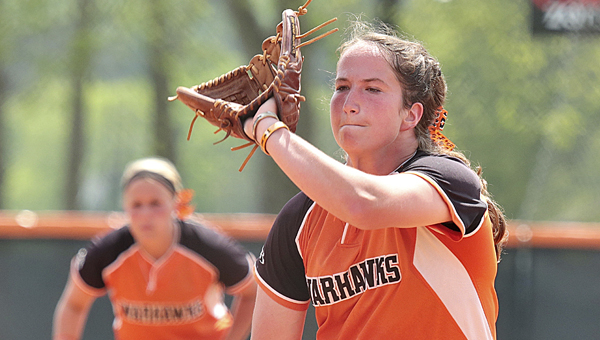 Cassie Jones from Dallas County High School dominated in Auburn Montgomery’s 7-0 win over Oregon Tech in the Warhawks’ opening game of the NAIA Softball World Series opener on Saturday. She struck out 11 batters and surrendered only one hit in the victory.–Submitted Photo

SIOUX CITY, Iowa — Cassie Jones, the Most Valuable Player of last year’s national tournament, picked up right where she left off in Auburn Montgomery’s 2015 Softball World Series opener Saturday, as she tossed 6 1/3 no-hit innings and struck out 11 to lead the Warhawks to a 7-0 victory over No. 7 seed Oregon Tech.

The Dallas County High School alumna struck out 10 or more for the seventh straight game and 21st time in 2015 and allowed just one hit in the shutout.

She surrendered only a seventh-inning single to eight-hole hitter Kayla Prock. Jones walked five and hit a batter, needing 128 pitches to pick up her nation-leading 33rd win of the season, while lowering her nation-best earned run average to 0.87. She has not surrendered a run in the last 32 1/3 innings, allowing just four hits during the span.

The Warhawks took the lead for good in the first inning, pushing across a pair of runs against Owls’ starter Rylee Carleton (20-5). AUM loaded the bases with two outs, before Jennifer Jenkins worked a walk to plate Lauren Shaw. Hayden Henderson followed with a single to centerfield, scoring Jade Sasser and upping the lead to 2-0.

Jones faced the first of two jams in the bottom of the first inning, when the Owls put runners at second and third with one out, following a walk, hit by pitch and groundout. However, Jones escaped trouble by striking out a pair and ending the threat.

AUM extended its lead in the top of the second inning, when Katie Spain connected on her team-leading 12th home run of the season, which also scored Katie Brinkman.

The Warhawks capped the scoring with three runs in the third inning, with Shaw delivering the key blow, a two-run single. Laci Driggers also earned a RBI with a bases-loaded walk in the frame.

With the win, the Warhawks (43-8) advanced in the winner’s bracket and were scheduled to take on No. 3 seed Lindsey Wilson Monday at 7 p.m. The Owls (45-15) fell to the loser’s bracket, where they will take on No. 8 seed William Carey in an elimination game Monday at 10 a.m.