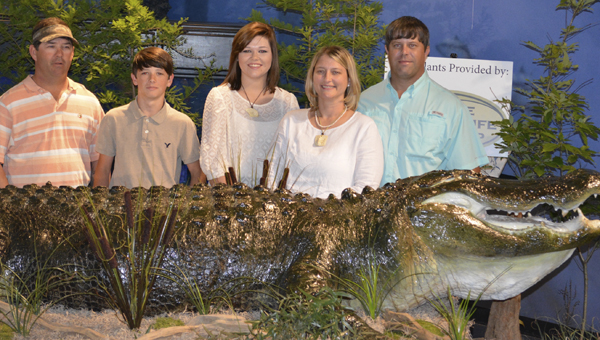 MONTGOMERY — The Alabama Black Belt Adventures Association, created in 2009 to promote the 23 Black Belt counties in Alabama, today celebrated the unveiling of the world-record American alligator caught on the Alabama River and now on exhibit through May 24 at the Mann Wildlife Learning Museum in Montgomery.

“This is a great example of the many activities that draw outdoors enthusiasts from all across the U.S. as well as Alabama residents to this region each year,” said Pam Swanner, ALBBAA Project Director. “It’s a testament to the fact that Alabama’s Black Belt region is a premier outdoor destination.”

Lifelong Black Belt residents Mandy and John Stokes of Thomaston, joined by Mandy’s brother-in-law Kevin Jenkins and his teenage children, Savannah and Parker, had no idea their first attempt to bag an alligator during the state’s short gator season would yield a Safari Club International-certified world record.

“It was just amazing,” Mandy Stokes said. “That was a long night, but it didn’t seem long. There were a couple of times we were sitting and waiting, but we had a job to do.”

The bull gator measured 15 feet, 9 inches to earn the Safari Club designation. It weighed 1,011.5 pounds and experts determined it was between 24 and 28 years old.

“I see this today as a celebration,” Guy said. “It’s really a celebration of the American hunter and the hunters, anglers and outdoor recreationists who support our cause.”

The Mann Wildlife Learning Museum at the Montgomery Zoo, 325 East Vandiver Boulevard, is open from 9 a.m. until 5:30 p.m.