Ellwood’s Williams plans to be pediatrician 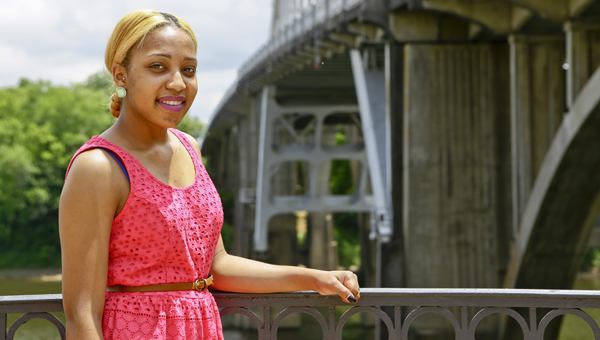 Shekinah Williams comes from a military family and has lived across the United States while growing up, and despite changing schools, has always strived to be the best in her class.

Moving from Georgia, she didn’t know what to expect when she arrived at Ellwood Christian Academy two years ago, but she knew what she wanted and she worked hard to get it.

“When I came here, my mom was telling me how it’s a reason that we’re all placed where we are,” Shekinah said.

She is the daughter of Rickey and Annette Williams. Shekinah was involved in many extracurricular activities and athletics during her two years at Ellwood. She was a member of the cheerleading squad, volleyball and softball teams, FBLA, SGA, president of the National Honors Society, yearbook staff, student council and many more. She is the recipient of several scholarships including being a finalist in Girl of the Year and receiving second in the Rotary Club scholarship program.

“I’m the last baby out of five kids and I’m the very first one to be valedictorian,” Shekinah said. “It was a proud moment [to be named valedictorian], no one can take that away.”

Annette said her daughter has always been the type to work hard and push herself to do better, and she believes it’s that determination that landed Shekinah in the top spot in her class.

“Hard does not describe Shekinah’s work ethics … she has been so involved in the community, in the church, in school and that’s just pretty much been her life. And she don’t take it lightly.” Annette said.

“I’m going to become a pediatrician and I plan to open my own pediatric facility. Not just for check ups, but for chronic illnesses, for the therapy, for the counseling for the parents and the families,” Shekinah said.

“As I was growing up, I was pretty healthy, … but I have an older sister [Ashley Styles], and she suffers from a chronic illness. … She wasn’t supposed to live to see 18, but she’s 23 now.”

According to Annette, Ashley has had multiple seizures, has been in and out of the hospital and had been put on life support three times.

During those times, Shekinah was right by her side, and paid particularly close attention to the doctors.

“I think all kids should have that fighting chance. That’s what really made me want to become a pediatrician so I know that the kids I’m working with, they won’t be given up on,” Shekinah said.

“The families will have the proper counseling and they will know step by step what’s going on and how to deal with this.”