Carter retires after 43 years as educator 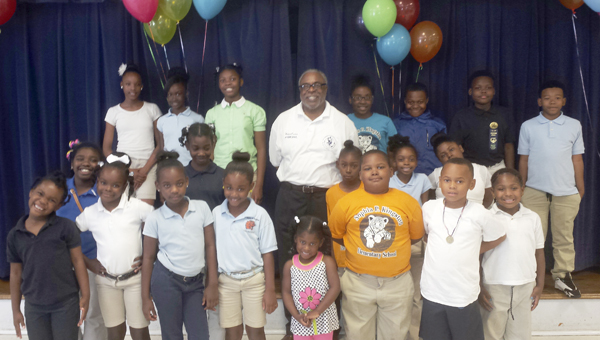 Sophia P. Kingston Elementary School Principal Robert Carter poses with some of his students at a party the school threw for him Thursday.

Forty-three years of Sophia P. Kingston’s Principal Robert Carter’s life was spent as an educator. But starting Friday, he will be starting a new chapter of his life and welcome retirement.

Initially, Carter did not think he would begin and end a career in education. His knack for sharing information and helping others lead him to become a special education instructor at Clark Elementary School.

“If someone was slow to learn something, I always had a way to kind of make it easy where he or she could relate to it,” he said. “I later found out, ‘Hey, I could get paid for this.”

Walking away from the students at Kingston will be the toughest part of his retirement. Carter said he’ll miss the boys and girls at the school.

“I used to love pre-k when it was here,” he said. “I would go down to pre-k in the morning. No one knew you were feeling sad or anything. I’d just go in there and everybody would be upbeat.”

Kingston students and teachers organized a party for Carter on Friday. Carter’s eyes welled when he described the surprise.

“All of my kids were standing around,” he said. “That’s when reality hit. I’m going to be away from all of this.”

Carter hasn’t finalized what he will do next.

“I hope my car doesn’t automatically turn and come this way,” he said. “I can see it happening.”

His 21 years as principal of Kingston has been appreciated by the school’s staff. The school’s counselor Cheryl Randolph said Carter has impacted many lives in the school.

“I am the educator I am today because of him,” she said. “He’s been a mentor. He continues to provide that positive support for our students.”