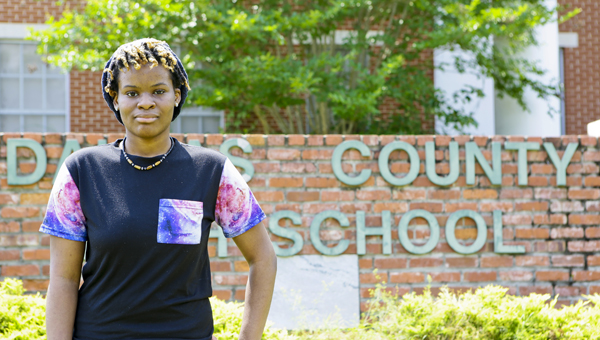 Voneshia Cleveland is no stranger to success and being at the top in everything that she does.

As a sixth grader at Martin Middle, Cleveland was named her class valedictorian. That success has followed her to her senior year, where now she will graduate as the valedictorian of Dallas County High School Class of 2015 with a grade point average of 4.296

Cleveland found out just this week that she was going to be the valedictorian, and she said it was a nerve-racking experience waiting to find out.

Cleveland was involved in many extracurricular activities during her time at Dallas County High School like the Beta Club, National Honor Society, science team, math team and the school newspaper. She is the daughter of proud parents Valerie and John Cleveland III.

“I am very proud of her. I always try to encourage my girls to do the best they can,” Valerie said. “I try to set the best example that I can set for them.”

John had the same to say about his daughter.

Voneshia’s parents are not the only ones that are proud of how hard she worked and her efforts as a student. The school’s counselor, Mary Susan Welch, said she is very proud of Voneshia, and she is excited for her future.

“I am extremely impressed with Voneshia. She has taken 11 classes that are weighted heavier than other classes,” Welch said. “In the future, she’s going to do well because once she puts her mind to something, she can do it. She’s going to represent us well.”

Voneshia said she plans to pursue a degree in biomedical sciences or chemistry at the University of Alabama, where she has received a full ride in scholarships.

Her determination and willingness to always push herself is why she said she is the valedictorian, and she is looking forward to her collegiate career at Alabama.

“What I’m most looking forward to is the challenge because I like a challenge, and I like pushing myself to do the best that I can do,” Voneshia said. “I just really value an education because I know most people aren’t lucky enough to have it.”