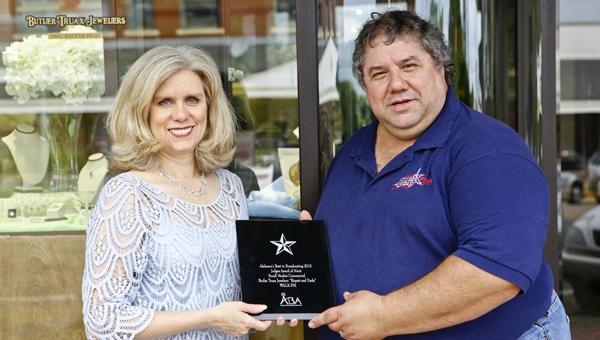 Todd Prater and Doris Truax have won an award from the Alabama Broadcasters Association for a five-part advertisement they wrote and produced for Butler-Truax Jewelers.

Rupert and Darla, also known as Todd Prater and Doris Butler-Truax, won the Judges Award of Merit for small market commercials from the Alabama Broadcasters Association earlier this year.

Prater, a radio personality at 100.9 ALE FM and KIX Country 101.5, has been in the radio business for more than 30 years and was excited to receive the award.

“It’s my first as a broadcaster,” Prater said. “It’s really something special. Our spot was competing in the neighborhood of 500 other commercials.”

Butler-Truax is the owner of Butler Truax Jewlers, but she is no stranger to radio. She said her father was involved with radio before she was ever born.

“I was excited because I’m not in broadcasting and won this award that people in broadcasting for 30 and 40 years would kill to win,” Butler-Truax said. “We spent hours writing these things … but it was worth it.”

The two did a five part series with their characters Rupert and Darla that aired on both 100.9 and 101.5 stations.

“It was a five part series that kind of sounded like a soap opera,” Butler-Truax said. “It was a mutual project, so we did it together.”

When Rupert and Darla get together, a little bit of work along with a lot of laughing takes place.

“On a scale of one to 10, I would say it’s a 20,” Prater said in reference of how much fun him and Butler-Truax had while making the commercials.“Sometimes it’s hard for me to stay in character because I’m laughing at her so much.”

Prater said he enjoyed working with Butler-Truax, and and he hopes they will continue to produce award worthy content.

“It was a real collaboration, which is something I haven’t really done much of before,” Prater said. “That’s exciting and fun because you bring out the best of each other that way.”