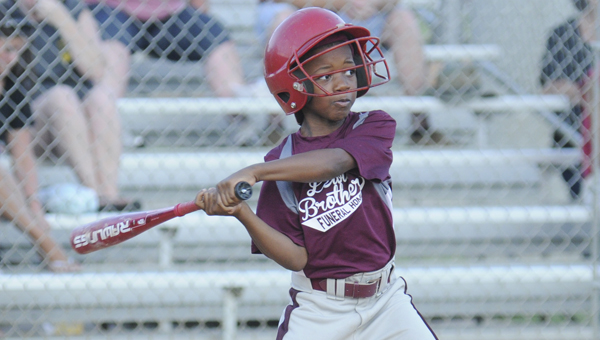 Some of the city’s youth league baseball teams are still playing catch up because their regular season games were canceled due to inclement weather in the area earlier this year.

“It’s been kind of hard at times because of the rain we couldn’t get our practice in,” said Lewis Brothers Funeral Home assistant coach Titus Lanier.

“The good weather is giving us a chance to make them up.”

Lanier said his team missed three games and even more practices because of the weather, but caught up with their regular season schedule.

“These guys are coming along even though we started out slow,” Lanier said.

“We are a team that starts with defense first. We started off hitting slow, but we are coming around and hitting the ball. We are playoffs ready.”

With two weeks remaining in the regular season, Lebo Jones, interim director of the Selma Parks and Recreation Department, said most of the teams are caught up on all their games except for the 9-and 10-year-old and 11-and 12-year-old boys.

“With the pitching limitations per week and them already having three games scheduled per week it is hard to make those up because we don’t want to hurt the kids’ arms,” Jones said.

Jones said the league should be caught up on its games by next week if there isn’t any more rain.

“Playoffs will start the first week of June,” Jones said. “If we don’t make up all the games we will just go by winning percentage. We’ve got a plan.”

Jones said it has been tough to be organized with the weather as disorderly as it has been, but it is something he deals with every year.

“Very seldom does it not rain at all during the whole season so you got to schedule around that,” Jones said.

“Last year we had a lot of games rained out, but it was more spaced out. This year the whole first week of the season was rained out so that’s kind of put a damper on things. It’s running pretty smooth though over all.”

Several makeup games will be played Wednesday night, but games will not be played Thursday and Friday due to area high school graduations.