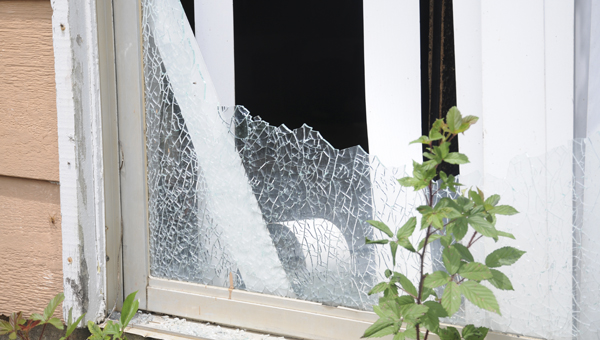 This broken window was at the crime scene at 39-year-old Jesscilus Phillips’ house Tuesday. Phillips was shot to death after what police believed to be a home invasion.–Blake Deshazo

A Dallas County man was murdered early Tuesday morning after a home invasion at a duplex on Laredo Court.

According to Captain Mike Granthum with the Dallas County Sheriff’s Department, 39-year-old Jesscilus Phillips was shot to death.

The Dallas County Sheriff’s Department got a call around 5:30 a.m. about someone lying face down in the driveway at a home on Laredo Court, which is in the Pine Glenn Estates neighborhood.

According to Granthum, when deputies arrived on scene, Phillips was lying in the driveway.

“No one was in the house but him,” Granthum said. “It appears he was shot at least one time in the upper torso.”

The sliding glass door at the back of Phillips apartment was busted out, so it appears someone tried to break into the home.

“We do believe someone broke into the house, but we don’t know what went on in the inside yet,” Granthum said.

Granthum said investigators believe Phillips was asleep when his house was broken into.

According to Granthum, nothing seemed to be missing from the house and money was not involved.

“We just think it was a random act,” Granthum said. “We’re still trying to turn over some of the rocks, and hopefully forensics will be able to help us out.”

Phillips long-time girlfriend, Julie Adams, and family members stood outside of the home Tuesday afternoon wondering why someone shot their loved one.

“You wonder how you go on, you wonder why someone would senselessly take someone’s life for nothing,” Adams said, as a tear rolled down her cheek. “If they robbed him, he might have had two dollars on him, but guess what? If they would have asked, he would have given them two dollars.”

Adams said Phillips was a very well-liked man in the neighborhood.

“He was a person who loved children. He was a happy person who enjoyed life,” Adams said. “He worked at Plantation Patterns, and when he was off he loved to be around his friends and family. He liked to be happy and tell jokes. He was a wonderful person.”

His best friend, John Hall, lives just across the street, and he could not believe the news when he hear about his long-time friend.

“I just stopped. I couldn’t believe it,” Hall said. “I had to see it for myself, and when I saw it, it tore me apart because our birthday is the same day. We would always hang out and cook barbecue together.”

Investigators don’t know exactly when Phillips was shot, but an autopsy should be able to pinpoint when it happened.

“Due to the condition of the body, we do believe it happened sometime earlier,” Granthum said “We knew he had been on the driveway for a while due to evidence.”

Granthum urged anyone with information on what happened to call the Dallas County Sheriff’s Department at 874-2530 or Crime Stoppers at 874-2588.