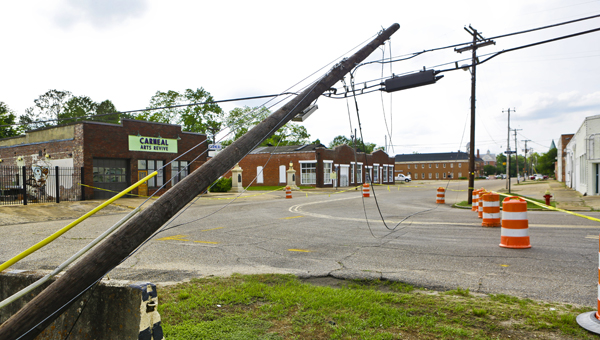 Part of Water Avenue has been closed off due to a sinkhole. Part of the ground near Water Avenue and Church Street collapsed Saturday and brought down a telephone poll, which fell into the street.–Alaina Denean Deshazo

For the second time in the last couple of months, part of Water Avenue has been closed off due to collapsing infrastructure.

Part of the ground near the intersection of Water Avenue and Church Street collapsed Saturday afternoon, knocking down a telephone pole.

“We’ve got it barricaded off, and we’re doing the research to find out what it takes to get it repaired,” said Mayor George Evans.

The intersection has been closed off since it collapsed, and the city is looking into what happened and what can be done to fix it.

Public Works Director Tommy Smith had a chance to look at it, but he is not quite sure what happened to cause the ground to sink in.

“I don’t want to speculate about anything, but it’s got a void in it, and it is right off the bank like a sinkhole,” Smith said. “It is about 15 to 20 feet [wide] from the way I looked at it right at the edge of the river.”

Smith said it doesn’t look like it collapsed into the river, but it looks more like a sinkhole.

“The bank did not shift to the river. It’s got about a 10-foot bank, and then it has a volcano-like opening,” Smith said.

Evans said the city’s engineers are looking at a solution to the problem.

“Right now they are looking at what can be done,” Evans said. “Between Ray Hogg getting some ideas and Tommy Smith, they will come back with some recommendations for what needs to be done and maybe what happened.”

The new hole is the second on Water Avenue in recent months. The other is near the intersection of Water Avenue and Lauderdale Street. Smith said the road caved in due to old infrastructure.

“That is a work in progress. We had cameras put down in there to actually see where the problems are,” Evans said. “They are putting the numbers together now to determine what it is going to cost to get it repaired.”

Evans and Smith aren’t sure when the holes will be fixed, but they are working to get solutions and estimates to fix the problem.