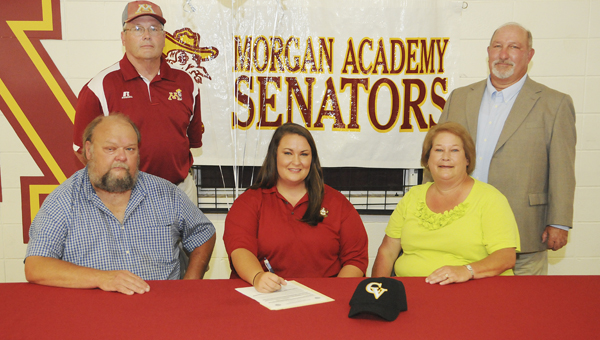 Morgan Academy’s Margaret Mims signed with Chattahoochee Valley Community College Monday after finishing with a 21-10 record for the Senators in 2015.

“It means a lot because I’ve worked so hard to play on the next level,” Mims said. “I started pitching when I was 12 or 13. I’ve been wanting to play college ball and now I can.”

Mims finished the season with a 1.963 ERA and 164 strikeouts while managing to stay healthy and pitch through 34 of her team’s 37 games.

She said her key to fending off the abuse of pitching that often, has been pulling tires at practice under the drill of head coach Ed Miller.

“We work really hard at practice,” Mims said. “I was out there every summer, Monday through Friday, pulling and pitching with coach Miller. If coach Miller hadn’t helped me I wouldn’t be where I am today.”

Miller said he made the players who were late for practice pull tires, but the workout turned into something Mims did regularly to strengthen her legs.

“Margaret got up to where she was pulling two full tires behind her,” Miller said.

“She would go 50 yards pulling tires then turn around and come back. You do that eight times and then go pitch; your legs have had an incredible workout. It’s not easy. I tried it myself one time and it will kick you.”

Miller said the car tires that Mims uses are the biggest ones he could find at the store.

Putting a rope around your waist and running with a tire attached to a rope behind you may not sound like a normal key to success for some players and coaches, but it is just that for Mims.