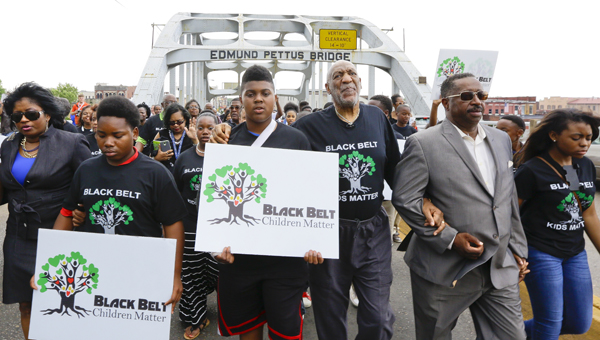 Bill Cosby spoke to students in Demopolis and Selma Friday and then led a march over the Edmund Pettus Bridge.

Cosby, who was in Alabama to help launch the Black Belt Community Foundation’s ‘Black Belt Children Matter’ campaign, kept the focus on education, but also let his comedic side show too.

“As always, if it is about education I would like to be able to touch the untouchables … the dreamers who really can’t see far and to erase some of the things that they think about that which is too hard and having more fun doing nothing and paying for things later,” Cosby said. “I am trying to motivate in that sense.”

Cosby started his journey in Demopolis at the Theo Ratliff Center Friday before travelling to Selma High School to speak to students. After his speech at the school’s auditorium, he and dozens of others marched across the historic bridge, chanting “education, motivation, Black Belt children matter.”

Cosby asked every person marching with him to write the name of a loved one on a sheet of paper, so that person could make the walk with them.

“Each kid will take a piece of paper with someone’s name on it, someone who couldn’t make it, whether death took them or they are in the hospital or in the war, and put it in the their purse pocket and walk across the bridge…,” Cosby said before the march.

Cosby, known for his time starring on The Cosby Show and his stand-up comedy routines, said even at age 77, “I’m still thinking funny.”

He showed that during his walk up the historic structure, where he took some time to dance. Once at the top of the bridge, Cosby turned around to those marching behind him and said a few words. He asked all of those walking with him to yell out the name of the person they’d written down or were paying tribute to.

Some yelled for family members, another yelled for President Barack Obama and a couple even yelled for Cosby.

He then led marchers over the final half of the bridge, before getting into an awaiting SUV and being whisked away.

Cosby said he worried his presence and the good he was trying to accomplish for the foundation might get overshadowed. The actor has been accused of sexual assault from over two dozens of women, but has not been charged with any crimes.

“This fellow Andrew Wyatt from Birmingham called and announced there was this organization and they wanted me,” Cosby said when asked how he got involved with the Black Belt Community Foundation. “They wanted to know if I would come and I said ‘Look, you’ve got to think about this situation that I’m embroiled in. That may not be cool.’”

Cosby said he didn’t want to bring “baggage” to Selma, especially during a year where the city was celebrating the 50th anniversary of Bloody Sunday.

“I said I really am not too sure about this,” Cosby said. “I said I really don’t want people to get into trouble and start arguing and fighting over me when the children are very, very important.”

After deciding to make the trip, Cosby kept his focus on the mission at hand, which was helping launch the Black Belt Community Foundation’s campaign.

“Education is very, very important,” Cosby said as he finished his speech at Selma High. “If you don’t accept it, this city and this particular city are going to miss out on some important people graduating from it.”