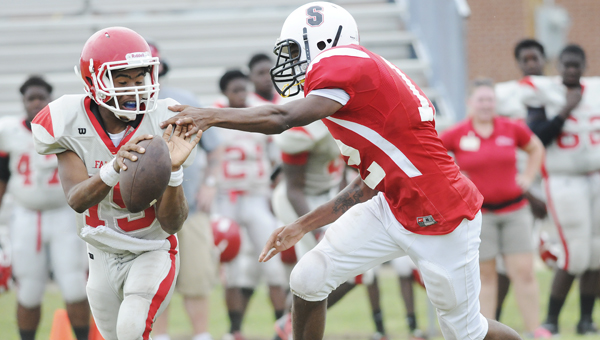 The Southside Panthers had highs and lows Thursday against Central Tuscaloosa in their’ spring jamboree game.

The defense, which held the Falcons to just a lone touchdown, made big stop after big stop and kept the Panthers close in a game they went on to lose 20-8. The Southside offense had some highlight plays, but couldn’t consistently move the ball.

Panthers head coach Daniel Flowers said the missed reads and five turnovers his team had could be chalked up to limited time on the practice field.

“I call them spring game mistakes,” Flowers said. “We can’t really say they messed up. It’s just the spring game. That stuff is going to happen.”

Southside actually led at halftime, despite only six yards of total offense. Dequan Johnson intercepted a pass by the Falcons and returned it 60 yards down the sideline for a touchdown. A two-point conversion run by Chris Edwards made the score 8-0.

Central made plenty of mistakes too. At the end of the first half, the Falcons were seemingly going in for the game-tying touchdown when a Central player dropped the ball, which rolled through the end zone for a touchback.

It didn’t take long for the Falcons to get things going in the second half though.

An early touchdown run pulled Central within 8-6, but that would be the only non-defensive score of the game. Southside had the ball and the lead to start the fourth quarter — a big advantage with a running clock — and seemingly was in control.

Johnson, who started at quarterback, carried the ball on the last play of the third quarter and picked up a first down. However, his helmet came off on the play and he had to exit for a play.

G’Neil Johnson entered, but on his first and only snap at quarterback the center and quarterback exchange was fumbled. Central Tuscaloosa picked it up and ran it back for a touchdown to take a 12-8 lead.

“It is always something like that with us,” Flowers said. “A play like that will turn into what cost us the game”

Central’s final score of the game came on an interception. Johnson’s pass was tipped in the air and returned to make it 20-8 Falcons.

Southside totaled 63 yards of offense compared to 206 for the Falcons. Flowers said despite the result, the offense had its bright spots.

“We had some plays,” Flowers said. “A block here and a block there and a 5-yard gain could’ve been a 20-yard gain. It’s not like we were way off on offense. We just missed on a few plays.”

However, the Panthers defense got numerous big stops throughout the game.

On Central’s opening possession, the Southside defense held on fourth down in Panthers’ territory.

“I think the defense played a good ballgame,” Flowers said. “The defense only gave up eight points. I’ll take that any day of the week.”

Southside’s spring game performance was the exact opposite of what the Panthers had shown during practices, Flowers said. He said the defense seemed behind the offense the entire spring, but that swapped Thursday.

In the fall, Flowers is hoping his team can put it all together.