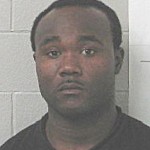 Clark told police a man, who was later identified as 22-year-old Derrick Levon Dower Jr. of Selma, by the Dallas County Coroner Alan Dailey and District Attorney Michael Jackson, jumped in his vehicle near Martin Luther King Street and Philpot Avenue. Clark told police he drove Dower around until they were in the Beloit-Orrville area. During the drive, Clark said the victim never demanded money, but said he was taking him to get money, Muhannad said.

During the drive, Clark told officers that Dower fired a shot inside the vehicle from a Taurus semi-automatic 9 mm pistol. Shortly after, Dower allowed Clark to get out of the vehicle to urinate, and when he did, Clark overpowered him, took the gun and shot him, according to Muhannad.

Muhannad said Clark later made contact with Selma Police Department officers on Broad Street, turned over the gun and told them he had killed a man in Orrville.

Muhannad said the gun allegedly used in the shooting was reported stolen during a burglary in February.

After being interviewed by the Selma Police Department, major crimes detectives found probable cause to arrest Clark. He was booked and transported to the Dallas County Jail with a bond totaling $2.5 million. Murder is a Class A felony. If convicted, Clark could face 10 years to life imprisonment and fines up to $60,000.

The Times-Journal’s Blake Deshazo contributed to this report.