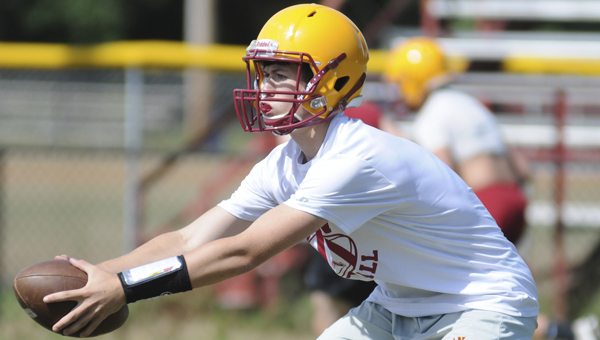 Morgan Academy quarterback Harrison Adams fakes a handoff during a play in Wednesday’s practice. The Senators will face Pickens Academy in a spring jamboree game Thursday.

Morgan Academy head football coach Jake Wingo will get a look at how far his team has come this spring Thursday when the Senators face Pickens Academy at 6 p.m. in a jamboree game.

After a season where the Senators won just one game, Wingo has changed things up. Morgan has swapped from a 3-4 defense to a 4-3 and the offense has transitioned to a spread, triple-option attack that promises to keep defenses on their toes. Both philosophies fit Wingo’s coaching style.

“I’ve always been a 4-3 guy on defense and I’ve always been a triple-option guy,” Wingo said. “We feel like now with the personnel we have now that we can do those things. Last year I didn’t think we could, but this year I think we can. It’s fun for me as a coach because we get to do the things I’m passionate about.”

Like most teams, the Senators spent their spring practices working on the fundamentals of the game and trying to get the offense and defense up to speed on the new formations and styles of play.

Wingo has also been trying to get some new faces up to speed. Morgan has 40 players out for spring training after finishing last year with only 26 players.

“We’ve got some guys fighting for positions and some competition going on, so it’s a good thing,” Wingo said. “We’ve got some more kids that came out this year and just the way the classes are there are more kids in our senior class and in our tenth grade class, so all of those kids were in ninth grade last year and a lot of them didn’t play varsity.”

Wingo said he can tell a big difference from where the Senators were last year and where they are now. Leadership has played a large role in that.

Returning players such as quarterback Harrison Adams and backs Woodham Kemmer and J.R. Wood have stood out in the locker room and on the field, he said.

“They are able to pick things up a lot quicker when you have guys come back and they are familiar with the coaching staff, our terminology and the way we coach,” Wingo said. “With our offense, our quarterbacks and receivers and backs have really picked it up quick so it’s been an easy transition.”