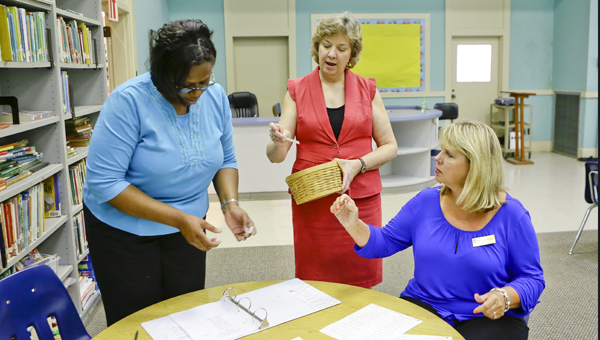 Byrd First Class Learning Center held a lottery Tuesday to draw names of those that will have an opportunity to attend the school during the 2015-2016 school year.

This year was the first year for the school to have only 3 and 4-year-old pre-k programs, and Byrd’s principal, Carolyn Keasal, said she is looking forward to the second year after an exciting first year.

“I think [the first year] was very successful. We had almost full enrollment,” Keasal said. “OSR (Office of School Readiness) has also provided coaches in the 4-year old classroom, so that’s a real help.”

Keasal said as part of the new programs, the school made some changes and so far, they seem to be going well.

“We got a new curriculum this year that wasn’t used in the past, called Creative Curriculum, and it goes along with the OSR standards,” Keasal said.

“I think you would find that the teachers feel like we have gotten back to a more developmentally appropriate program for 4-year-olds.”

Before the lottery began, Keasal was at her desk entering information from this year’s students.

“I was just putting in some data on the computer as to what percentage of letters and sounds these children know, and it’s amazing how far they’ve come from the beginning of the year till now, and that’s just one small little piece of the puzzle is the knowing your letters and sounds.

Most of our children know at least 80 percent of the letters and sounds at this point, so that’s a really positive thing,” Keasal said.

“It really is my favorite thing to do, [to see how the children have improved].”

Tynarmia Miller, the school’s secretary, and Amy Hasty, an OSR coach, both helped Keasal with the lottery.

“The lottery is a requirement of the [Alabama] Office of School Readiness, who is contributing some funding here at Byrd,” Keasal said. “The governor wants to make sure that a high quality voluntary pre-k is available to all families who want that.”

Byrd has 11 4-year-old classrooms that fall under the state pre-k guidelines, according to Keasal. Currently, the school has 246 students.

Before the lottery, there were a total of 176 available slots that could be filled, but only around 70 names were submitted.

Because they had more slots open than names submitted for the lottery, every applicant that had completed all forms and requirements was selected to attend next fall semester.

“In the future I hope that we get people in the community to start understanding about the lottery,” Keasal said.

As the principal of the school, Keasal said it’s exciting to see the progress of her young students and she knows they will be better prepared in the future.

“It’s really exciting because I know when they go to kindergarten, they may lose a little over the summer, but they don’t forget everything,” Keasal said.

“So it’s going to create children who are ready throughout life if we get them ahead in pre-k.”

Because spots are still open, Byrd will continue to accept applications for next school year. The school may be reached at (334) 874-1620.