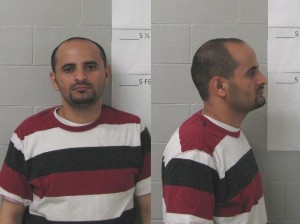 A convenience store clerk was arrested Sunday night for attempted murder after he allegedly shot a man that threatened him.

Obad Ali Al-Amri, 29, was arrested Sunday around 10:30 p.m. after officers found a 25-year-old Selma man that had been shot in the neck. Al-Amri was charged with attempted murder.

“Selma Police Department officers were patrolling the 1300 block of Alabama Avenue … when they spotted a person crawling across the parking lot of a local business,” said Lt. Curtis Muhannad with the Selma Police Department. “When they made contact with the victim, it was a black male who had been shot in the neck. The victim advised that he had been shot by the store clerk.”

Officers made contact with Al-Amri, who works at a convenience store on the 1200 block of Alabama Avenue.

“He advised officers that the victim was in the store wanting to purchase alcohol after 9 p.m.,” Muhannad said. “The victim became disorderly when he would not sell him the alcohol and knocked items off the counter and pulled a knife and told him to come outside.”

It is illegal in the city of Selma to purchase alcohol after 9 p.m. on Sundays.

According to Muhannad, Al-Amri met the 25-year-old outside and fired several shots at him with a 9 mm semi-automatic handgun. The victim was struck in the neck.

“The victim received first aid by the local ambulance service and was airlifted to a hospital in the Montgomery County area in critical condition,” Muhannad said.

After Al-Amri was detained and taken to the police department for questioning, officers recovered the handgun, but they were not able to recover a knife that the victim allegedly threatened the clerk with.

“If the guy was just being disorderly and if, in fact, he may have pulled a knife, it is still considered menacing,” Muhannad said. “The [victim] wasn’t trying to do anything inside of the store. If [the clerk] would have contacted law enforcement at the beginning of the situation, then you would have a case of menacing or harassment instead of what we have now.”

According to Muhannad, Al-Amri was charged with attempted murder because he never reported the incident and followed the victim outside.

“Mr. Amri was interviewed by a CID Detective and was arrested on probable cause for attempted murder,” Muhannad said. “He was booked and transported to the Dallas County Jail with no bond.”

Attempted murder is a class C felony. If convicted, Amri could face 10 years to life in prison and up t0 $60,000 in fines.