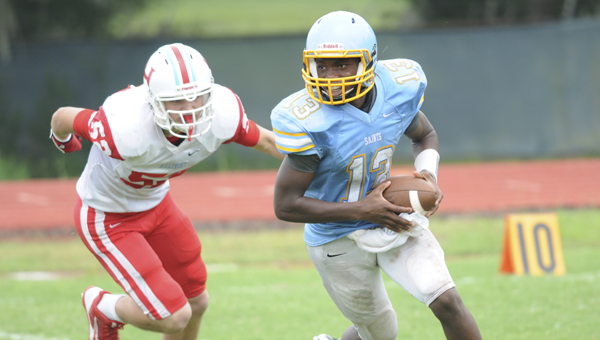 Selma quarterback Marquell Moorer tries to scramble away from a defender from Hillcrest-Tuscaloosa last year. Moorer is back and competing for the starting quarterback position for the Saints, but also may start on defense this year, according to head coach Leroy Miles.

The last two seasons Selma has played with some of the best teams in 5A and 6A high school football and has been competitive in just about every game.

The recipe for that success has been running the football behind a stout offensive line that showed the way for physical running backs that have wore down defenses.

Selma head coach Leroy Miles wants to use the same philosophy on offense this year, but for the first time in four seasons he’s facing uncertainty on the offensive line.

Among those that have departed are twins Ryan and Bryan Hurt, who have served as the unofficial leaders of the offensive line the last several years. Both have started every game for three years and have played every snap in that span.

Left in their absence are players full of potential, but lacking experience overall.

“I’m very concerned with that right now,” Miles said. “Our goal was to come out of this spring with an answer offensively in terms of the offensive line… right now we are puzzled. The coaching staff and I are racking our brains to try to come up with a solid combination.”

There are some bright spots though.

Defensively, linebackers Aderick Moore and Herschell Brown are drawing interest from colleges and lead a defense that looks like it will provide an identity for the Saints this upcoming season.

“They are our leaders,” he said. “They are the strongest guys on the team and they work really hard. I can’t say enough about these two guys. I’m really proud of them.”

Plus, quarterback Marquell Moorer, who was thrust into action after an injury sidelined senior Jesse Boggs last year, returns. Miles said Moorer may even play defense as the Saints’ hunt for the best eleven offensive and defensive players to put on the field at once.