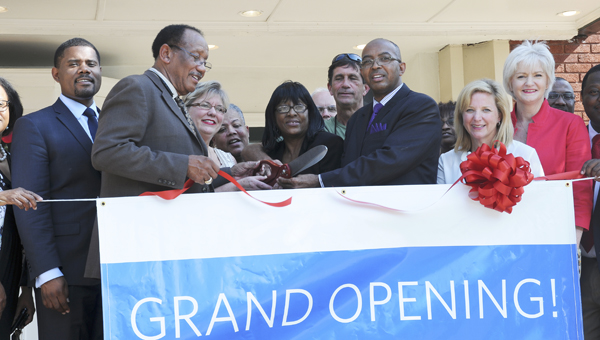 Selma’s Walton Theater has been open for a couple of months, but the Selma and Dallas County Chamber of Commerce helped make it official Friday afternoon with a ribbon cutting.

“I am humbled that they came out,” said pastor John Grayson, who runs the theater through All Things Are Possible nonprofit.

“We started this process over a year ago talking with the city. We’re blessed to be able to come to a conclusion with the city. They were very generous toward us because I think city has the same interest that we have to provide wholesome movies and entertainment.”

Grayson and Evans had the honor of cutting the ribbon, as others in attendance applauded the official opening of Selma’s silver screen.

“We had so many people who talked about wanting a movie theater, and now we have a movie theater again,” Evans said. “As we approach the summer, it gives our young people, as well as adults, an opportunity to come watch a good movie, drink sodas and eat popcorn, hot dogs and candy bars. They can just enjoy the atmosphere.”

With a snip of the scissors, the ribbon was cut, and it was time to show those in attendance what the Walton Theater has to offer. Grayson, along with the theater’s volunteers, took people on a tour to show them Selma’s home for movies.

Projectionist Walter Curtis gave Evans and others a sneak peak of the theater’s projection room, which features a state of the art equipment and screen.

As the tour came to a close, the theater played host to a dinner to say thanks to the many volunteers that help run the Walton and to the city and others that supported them in getting the theater back open.

“I want to thank ATAP,” said Councilwoman Angela Benjamin. “Thank you all for bringing this theater back to Selma, our own little hometown theater.”

Friday’s ribbon cutting ceremony and dinner was just the beginning of the Walton Theater’s weekend festivities. The theater will host a free street festival for the community today from 10-12 p.m. in front of the theater. There will food, games and other activities for children.