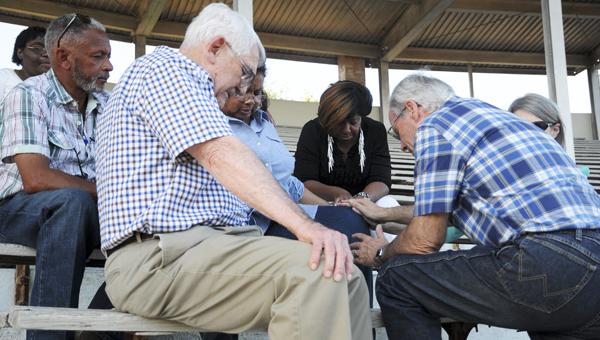 As the sun set over Memorial Stadium Thursday, a small group of people of all walks of life in Selma gathered together for National Day of Prayer.

Memorial Stadium is accustomed to seeing a crowd cheering on their teams to victory, but this crowd was much different. It was a small, quiet group that was made up of 10-15 people with one common goal in mind – praying.

“All across the nation in all kinds of venues there are people praying today, and there is just a huge swell of prayer rising to Heaven, and that makes a difference,” said Daniel Martin, senior pastor at Bethel Church. “One of the things that makes [National Prayer Day] significant is there is power in unity when two or three are gathered together.”

From 6-7 p.m. the group prayed. They bowed their heads and took turns asking God to bless Selma and the rest of the nation.

“I believe that God is here in our land, and I just believe that the nation will be healed, not just Selma,” said Annie Towns. “I just believe in God to heal our land. Some wonderful things are going to happen, and I want to be a part of it.”

For Towns, prayer is a powerful engine unlike any other that is much needed in today’s society.

“Without prayer, nothing happens,” Towns said. “Prayer is very important, and I just believe that if people pray, then our city and our nation will be better.”

Martin, who led the group in prayer, asked for guidance for government leaders, city officials and children, among others.

Martin stressed the importance of supporting and praying for government leaders because of the position they hold.

“They’ve all got positions and rolls that in the natural they can’t come up with everything that is needed, and they need God’s help,” Martin said.

Tears were shed, and testimonies were heard in the hour the group spent praying. And as the sun set over the horizon, Martin closed it with one last prayer from Psalms 25:15.

As Martin uttered the final word of the prayer, the group went their separate ways feeling much closer to one another than they were before.

“[Prayer] is rich in connecting with people and being close to people,” Martin said. “Prayer brings us closer to people, and it is just rich in seeing God’s people doing what God wants us to do and doing it together.”