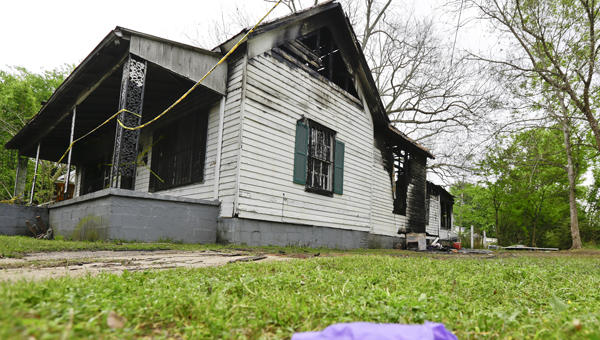 A husband and wife were killed in an early Sunday house fire in the 2300 block of Water Avenue. Roy Morgan and Brinda Ann Lee Morgan appeared to have died from smoke inhalation, according to authorities.

By Alaina D. Deshazo and Blake Deshazo | The Selma Times-Journal

An Easter weekend fire claimed the lives of a husband and wife early Sunday morning on the 2300 block of Water Avenue.

According to Selma Fire Chief Mike Stokes, Roy Morgan, 61, and Brinda Ann Lee Morgan, 53, appeared to have died from smoke inhalation, although the actual cause of death remains unknown until official autopsies are performed.

“We got the call at 1:33 a.m., and a passerby was actually going by and noticed the smoke coming from the home. He stopped and started beating on the doors and windows, but he couldn’t get them to the door,” Stokes said.

“There was a chair on the front porch, and he busted the window out on the front. All the doors and windows had burglar bars on … so unfortunately he was unsuccessful getting them out before the fire department could get there.”

According to Stokes, one of the victims died after being removed from the home.

“CPR was performed by firemen on the scene, but unfortunately it didn’t work,” Stokes said. “The other victim was found, and they were already deceased.”

Stokes said the home wasn’t fully involved when the fire department arrived on scene, but there was already a lot of damage from fire and smoke.

“Because there was somebody on the scene letting [the fire department] know that there were two people inside, the Selma Fire Department immediately went into rescue mode and not fire attack mode,” Stokes said. “They were just trying to control the fire long enough to get the victims out of the house.”

According to Stokes, the fire appears to have started at the rear of the home, but the cause of the fire is still unknown at this time.

“The Alabama State Fire Marshall’s office was called in, and it is still under investigation,” Stokes said.