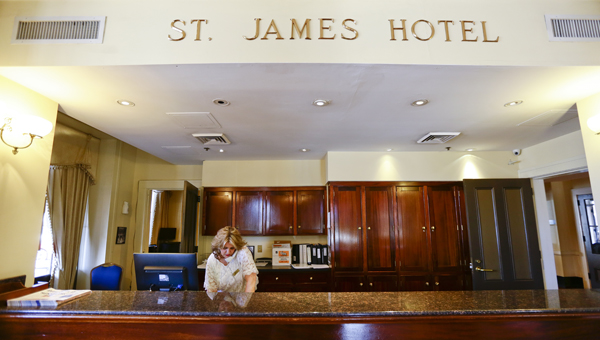 Jennie Wyatt works the front desk at the St. James Hotel on Tuesday afternoon. The city of Selma has taken over day-to-day operations and cancelled its contract with Strand Development. About half of the hotel’s 25-30 employees will be let go, including chef Carlos Brown.

By Blake Deshazo | The Selma Times-Journal

The city of Selma is taking over the management of the St. James Hotel after a mutual agreement was reached Monday between the city and Strand Development to terminate their contract.

Employees were told Tuesday by Strand that the contract with the city was terminated effective immediately, and they were no longer on Strand’s payroll.

“Strand came in and talked to all of the employees, and as of today this is their last day of being on the payroll with Strand,” Selma Mayor George Evans said.

According to Evans, the city will take over the day-to-day operations of the hotel. In doing so, the staff will be downsized.

“There are over 25 people roughly that were hired, and that is including everybody, including the chef and everybody else,” Evans said. “That number will pretty much be cut in half ideally to keep things going.”

Sonya McCall, who once helped manage the hotel, is being hired by the city to temporarily manage the hotel as an independent contract until a long-term decision can be reached.

According to Councilman Cecil Williamson, the mayor and other members of the council discussed McCall’s contract Tuesday afternoon, and it will be brought before the council at its next meeting Tuesday.

Once an agreement is reached with McCall, she will determine what employees will remain on the St. James Hotel staff.

“There will be a certain number of people hired back in order to keep operations going and then later on others may be brought on,” Evans said. “The city will put them on the payroll as independent contractors until the city can get RFPs (Request for Proposals) from other management teams or companies that would like to manage the hotel.”

According to Chef Carlos Brown, he was told Tuesday that the city could not match the salary Strand was paying him, so he will no longer be managing the restaurant at the St. James Hotel.

Evans wants to see the hotel be successful, while others in the city want to sell it.

“I certainly want the hotel to be successful, and at the end of the day if the city council chooses to sell it, then that is their call,” Evans said. “But until that time I’m into the hotel being managed properly and successful and being able to offer people a nights stay with food, drinks and things like that.”

Williamson, who was strongly for ending the contract, wants to sell the hotel.

“I think it should definitely be sold, and I think the sooner the better. It is just costing us money that we do not have,” Williamson said.

According to Williamson, Strand claims the city owes them money.

“They say that we owe them some more money. We were paying them $20,000 monthly, but according to [Strand] they were asking for varying amounts but not $20,000,” Williamson said.

Williamson said the city’s contract with Strand said the city would fund a working capital account and deposit money needed to keep the hotel operating. The Times-Journal couldn’t determine Tuesday how much they say the city owes them.

We were told yesterday (Monday) that they were asking for different amounts. Sometimes, it was much more than that [$20,000],” Williamson said. “I don’t think the city should be in the hotel business. We should not be competing with other hotels in the city and taking their tax money to compete against them. That is basically unfair. I think we should sell this hotel as soon as we can.”