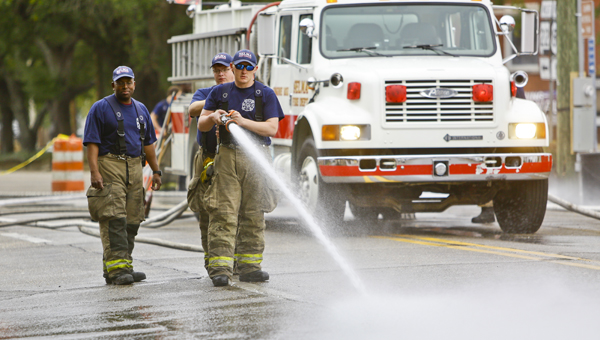 Members of the Selma Fire Department hose down a street Monday morning as clean up from this weekend’s activities was in full swing. Most of the litter was picked up by Tuesday.

By Tyra Jackson | The Selma Times-Journal

More than 60,000 people participated in Bridge Crossing Jubilee events on Saturday. That number grew to close to 100,000 on Sunday. The cleanup from that massive amount of people in downtown Selma has been completed.

“The crowd was overwhelming,” Selma Mayor George Evans said. “There were no incidents. People got along. It was a beautiful and wonderful day.”

An unfortunate part of having that many people in a town of 20,000 is the litter they leave behind. The amount of litter was beyond what anyone expected, Evans said.

“It’s overwhelming compared to what the previous years were. Every other year we had, we would do clean overnight, but this was bigger and much more crowded than we expected.”

The city had most of the litter picked up by Tuesday. The Selma Fire Department hosed down some downtown streets.

“Big cities have big trucks and sweepers,” Evans said. We don’t own all of those things, but it takes money. Our men are working by hand to pick up things, so it takes a little bit longer.”

Businesses, churches and volunteers also dedicated their time to clean up.

“I’d like to thank the churches that volunteered to help clean up around their churches and on the streets,” he said. “That helped us a lot too. I also thank volunteers who’ve helped.”

“It’s all about progress, and the fact people came to our city,” he said. “It was overwhelming, but it was good to have that kind of overwhelming amount of people coming to enjoy themselves.”

Anyone with questions or concerns about the cleaning effort should contact the mayor’s office at (334) 874-2101.