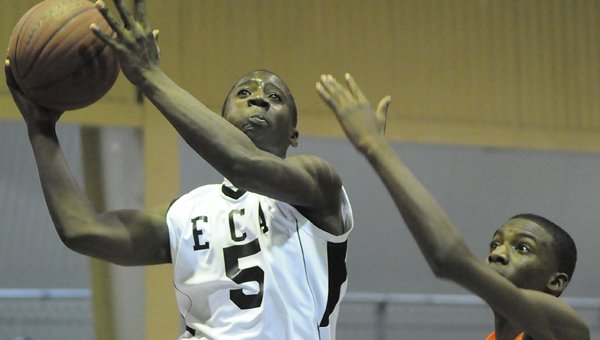 Ellwood Christian guard Jalen Furlow rises for a layup in a game earlier in his career. Furlow and the Eagles will open their basketball season Friday against Selma High School in the Selma High School Thanksgiving Shootout.–Daniel Evans

Ellwood Christian players have had to wait and watch as other teams from Dallas County opened up their basketball seasons over the last two weeks.

Ellwood Christian made the second round of the 1A football playoffs, which put the start of basketball season on hold, especially considering most of the Eagles football players also make up the majority of the basketball team.

The wait won’t last much longer.

Ellwood will take part in Selma High School’s Thanksgiving Shootout Tournament Friday and Saturday, giving the team a chance to step onto the floor for the first time this year.

When Friday’s game rolls around, the Eagles will have been practicing for a full two weeks. In terms of time on the floor this year, they’ll be at a big disadvantage against undefeated Selma (4-0) when the teams take the court at 8:15 p.m.

“We’re not making excuses that we were on the football field longer than any other team in our area,” Walker said.

“We are just taking it how it is. It is what it is and we are going to do our thing.”

Walker is expecting some sloppy play early on, just because his team hasn’t seen another team or referees since last season.

He also has high expectations, which he expects his team to live up to.

“My expectations are always to the top,” Walker said. “If you have a high expectation, your kids will always rise up to the expectation.”

The Eagles have seven seniors, which should help Ellwood deal with any early season issues. One of those seniors, Meadowview Christian transfer C.J. Grimes, will not be able to play until after this semester ends, so he will miss the Eagles’ first games of the season.