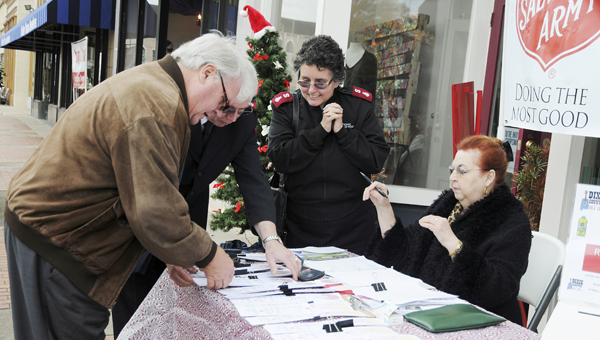 About 487 of the 600 angels had been adopted with a couple of hours still left to go Tuesday.

“It’s really great that people that can do this,” Welch said.

Those who sign up are given a wish list from the sponsored child, both needs and wants. Once the donors have shopped for those gifts, they return them and the wish list to the Salvation Army.

The organization asks that all presents be returned to its office at 2104 Franklin St. by Dec. 12.

Those who don’t have time to shop can donate money, and someone will buy gifts for the angels, who remain anonymous.

With so many angels adopted Tuesday, Welch was confident the event would be a success.

“I get really excited knowing that they are going to be taken care of, and we know the Lord always answers that prayer somehow,” Welch said.

She went on to say the Salvation Army would not be able to conduct the blitz without the support of the community.

“We wanted to make sure these kids have a Christmas,” Jones said.

Organizations partner to give away books