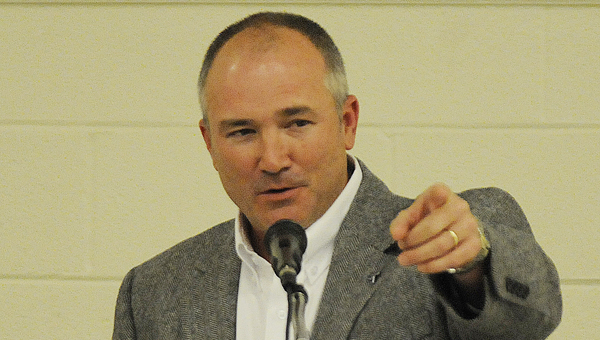 Selma welcomed home one of its own Monday night, as Troy assistant football coach Shayne Wasden spoke at the Selma Quarterback Club on scholarship night.

Wasden, who has been on the Trojans’ staff for the last eleven years, was happy to be back in the place where he spent most of his youth.

“This is my home. Before Troy the longest I ever lived anywhere was Selma,” Wasden said. “This is my home, and I have been looking forward to this speaking engagement for quite some time.”

Wasden kept the crowd entertained, telling stories from his playing career at Auburn and sharing some fun moments from his personal and professional life. The club showed Wasden’s most famous collegiate play — a 25-yard touchdown pass to beat Florida in 1989 — on a slideshow.

When the audio from the play unexpectedly started playing during Wasden’s speech, he took it with stride.

Wasden earned three letters playing for the Tigers as a wide receiver.

“Dad had played there so it made it all that more special to me — getting to play where my dad had played,” Wasden said. “

Wasden played in the first Iron Bowl ever played at Jordan-Hare Stadium, which was a 30-20 victory in 1989.

Auburn stayed at a hotel to stay away from the crowds for that game, but when the Tigers returned to the stadium Saturday to get ready for the game, Wasden was blown away by the crowds.

“I’ll never forget coming back to that stadium and there will never be another first time,” Wasden said. “… Up to that point our Tiger Walk, which we did every Saturday, everybody stayed on the outside of the road, but that day it was a single file line that we had to walk through. It was amazing.”

Derrick Henry rushed for two touchdowns and caught another to lead the Tide to a 48-14 victory over the Western... read more