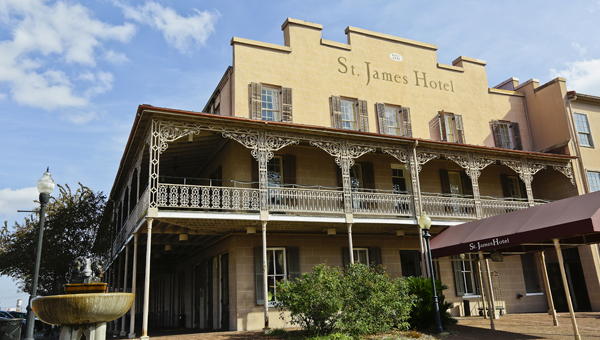 The April 1865 Society, Inc. has added a historical marker to the St. James Hotel in Selma.

To make things easier for visitors, the April 1865 Society, Inc. is placing historic markers around the city, allowing visitors to tell where they are and what significant moments in history happened there.

“Sometimes, when the museums are closed, we do actually have people that come to Selma that are interested in Civil War history. This will allow, once the series of markers goes up, to have a Civil War trail,” said James Hammonds, chairman of the society.

The historic marker is to be put up at the St. James Hotel at 10 a.m. Tuesday and will be the second of its kind.

The first marker went up in July and is located at the entrance of the annual Battle of Selma Re-enactment site.

After Tuesday’s unveiling, the society plans to erect nine additional markers by the anniversary in April.

“We could have as many as 20, but we have funds for the first 10 currently,” Hammonds said.

The historic markers are considered to be some of the most advanced designs in the state.

“On the back, there is a map that was created in 1865 by the Union forces that shows the street grid and the fortifications around Selma,” Hammonds said.

“We have also added QR codes on the back that will take you to a site that you can access through your phone.”

On the related website, there will be videos, music and more information about the location and even a clip of a local person reading about the history of that particular location.

The visitors can also easily find where they are in relation to the street grid by looking at the map on the back.

The marker to be placed at the St. James Hotel will display information on the hotel, General J. H. Wilson and Benjamin Sterling Turner.

“It’s kind of unique, because it’s not only about the St. James Hotel on the map side. There’s actually a picture of General Wilson and his narrative that tells you about his bio,” Hammonds said.

“Not only will it talk about that being the general’s headquarters, but we also go on to talk about the man who was actually managing the hotel during the Civil War. He was a slave named Benjamin Turner.”

It goes on to tell the story about him becoming the first African American Congressman from the state of Alabama.

The hope is that the markers will allow out-of-town guests to experience Selma on their own and allow them a chance to step back in time.