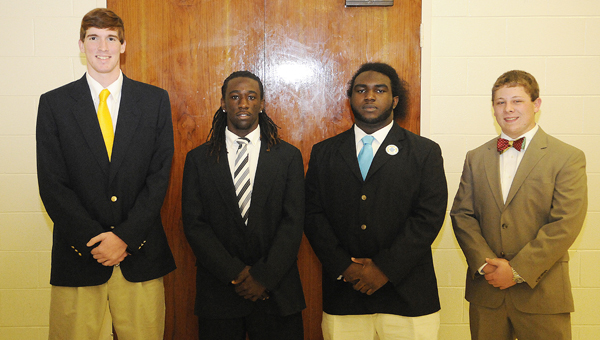 The Selma Quarterback Club gave out thousands of dollars in scholarships Monday night, with each student coming from a different Dallas County-based high school.

“This is what our club was founded to do, to help these individuals with scholarships at their school,” said scholarship committee chairman Gus Colvin.

The club’s scholarships are awarded based on academics, participation in school and community activities and financial need.

“I was extremely honored,” Stockman said. “It is always an honor to be among some of the finest young men in the town of Selma, Ala.”

Stockman plans to attend the University of West Alabama and enter the welding program.

Walker, who plans to attend South Alabama and pursue a degree in exercise science, admitted he was excited when he found out he was receiving one of the scholarships, but his classmates may have been even more excited for him.

“I am mostly going to try to pay for my room and board with this scholarship,” Walker said.

All four scholarship recipients were thankful to be awarded the money, especially with the cost of a college education skyrocketing.

“Anything that you aren’t having to pay and your family isn’t have to pay, it helps out a lot,” Jones said. “It makes you feel like you earned getting there.”

Jones plans to attend Marion Military Institute, where he hopes to play baseball.

Griffin plans to attend Alabama A&M, where he will pursue a degree in mechanical engineering.

The April 1865 Society, Inc. has added a historical marker to the St. James Hotel in Selma. Next year is... read more