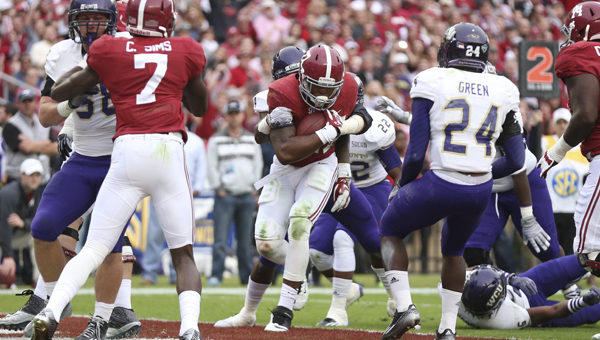 Derrick Henry rushed for two touchdowns and caught another to lead the Tide to a 48-14 victory over the Western Carolina Catamounts.

TUSCALOOSA. (AP) — Banged up in two straight wins over SEC West bruisers, No. 2 Alabama took a while to overwhelm a lower-division team that wasn’t supposed to be able to put up much of a fight.

Derrick Henry rushed for two touchdowns and scored a third on a catch, all in the first half, to lead the Crimson Tide to a 48-14 victory over Western Carolina on Saturday.

The Tide (10-1) recovered from a slow start to score the final 31 points in its first game since rising to No. 1 in the College Football Playoff rankings. FCS member Western Carolina (7-5) scored a touchdown on the opening drive and trailed just 17-14 early in the second quarter.

Blake Sims was 17 of 25 passing for 222 yards and two touchdowns. He also threw an interception in the end zone to snap a 158-pass streak without one. Henry had touchdown runs of 10 and 23 yards and a 9-yard scoring reception.

Neither played in the second half.

The Tide, which was coming off close wins over LSU and No. 4 Mississippi State, can clinch a spot in the SEC championship game with a victory next weekend at home over No. 16 Auburn.

Western Carolina popped Alabama with a 75-yard drive to open the game. The Tide recovered a third-down fumble, but the Catamounts got a mulligan because of an inadvertent whistle by the officials.

“We came out sluggish. We weren’t ready to play,” Alabama safety Landon Collins said. “They hit us with a few quick passes and moved the ball downfield on us, and (we) weren’t prepared for it.”

For Western Carolina’s players, it was a big deal to play with Alabama into the second quarter.

“They’re jacked up,” Catamounts coach Mark Speir said. “They came here to play a big game. We told them: ‘We came here two years ago with not a very good football team. From the time we got here, we were in the 4-minute offense just trying to shorten that game.’”

The game did supply some injury scares for the Tide, which has won 15 straight at Bryant-Denny Stadium.

A half-dozen players missed time after getting hurt during the game, including star wide receiver Amari Cooper, who played only one series. Cooper tied Alabama’s record with 194 career catches by making three on the drive, but didn’t return after bruising his knee.

Tight end Brian Vogler was taken directly into the locker room after getting hurt on the opening drive of the third quarter. Saban said he and receiver ArDarius Stewart both have knee injuries and their status is less clear.

Backup quarterback Jake Coker saw his first action in four games and completed 12 of 18 passes for 115 yards and a touchdown. Tyren Jones ran for 75 yards, and Altee Tenpenny gained 64.

Western Carolina’s Troy Mitchell, who started as a freshman against Alabama in 2012, fared much better this time. He completed 23 of 39 passes for 221 yards with a pair of scores.

Karnorris Benson had nine catches for 118 yards. The Catamounts were held to minus-8 yards rushing.

Alabama responded with three touchdowns in a 5:56 span after Western Carolina capitalized on Henry’s fumble to pull within a field goal. The Tide gained 262 yards in the second quarter.

“We expected them to come back, because it is Alabama,” Catamounts running back Spearman Robinson said.