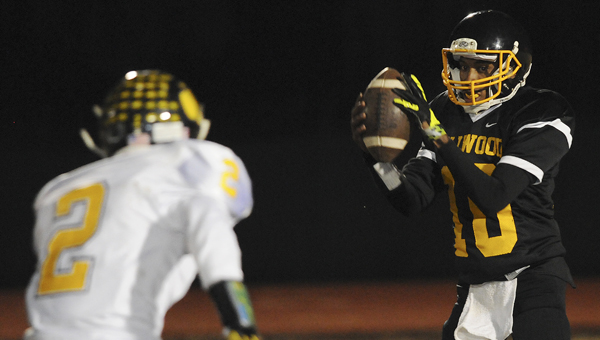 Ellwood Christian’s Michael lewis looks toward a Billingsley player during last week’s loss to the Bears in the second round of the 1A playoffs. –Daniel Evans

The high school football season in Selma and Dallas County came to a close last week, as Ellwood Christian fell to Billingsley in the second round of the 1A playoffs.

The Eagles were the lone playoff representative from Dallas County, but that doesn’t mean it wasn’t an entertaining year of football around the county.

Every school wants to win the state championship, but every school’s situation was different entering the season.

Ellwood Christian, Morgan Academy and Dallas County had new coaches, while Selma was coming off of a playoff season. Keith had made the postseason six consecutive years, while Southside was looking to make the playoffs for the first time under coach Daniel Flowers. Meadowview Christian had changed associations, moving to the Alabama Christian Athletics Association from the Alabama Independent School Association.

There was a lot of “new” and a lot of question marks. Now that the year has come to a close, it’s a lot easier to see how each team fared. Below are my grades for each high school in Dallas County:

I’m not sure how this grade could be anything else. Ellwood Christian won the school’s first playoff game, hosted the school’s first postseason game and defeated Keith for the second time in two years. Obviously, the playoff game — a 72-12 loss to Billingsley did not go as planned. Nobody wants to give up 72 points with an entire offseason to stew about it, but that shouldn’t diminish what Eric Martinear’s team accomplished this season.

The Eagles’ offense averaged 27.9 points per game, including scoring over 30 points five times. The defense was another story, as Billingsley, Maplesville and Linden had their way with Ellwood, scoring over 60 points apiece and showing why they are 1A powerhouses.

The biggest thing to take away from the Eagles’ 2014 season is that Ellwood appears to be an up and coming program.

Selma finished 6-4 but the Saints were very close to finishing 8-2. Close defeats to Hillcrest-Tuscaloosa and Bessemer City kept Selma out of the playoffs, which was this team’s ultimate goal.

The Saints beat up on county teams, winning games over Southside, Dallas County, Keith and Ellwood Christian but didn’t fare as well in the first year after realignment made them a 6A squad.

It should be noted that injuries, including the one to quarterback Jesse Boggs, played a factor.

In Marty Smith’s first year as head coach, it was easy to see the Hornets making strides on the field. Dallas County defeated Sumter Central, Wilcox Central, Southside and had Central Tuscaloosa on the ropes in Plantersville.

Dallas County had won only four games combined over the last three seasons.

The Panthers fell short of their ultimate goal, which was to make the 4A playoffs, but won three games for the second consecutive season for the first time since 2004 and 2005. Injuries played a role, as Southside had to flip flop quarterbacks between Khamari Gibbs and Scott Cole throughout the year.

Meadowview jumped out to a hot start, starting 2-1 before losing its last seven games. The Trojans had bad luck with injuries, losing Wesley Gunter before the season due to a knee injury.

Going 1-9 is never fun, but at least the Senators were able to enjoy a dramatic, overtime win over Hooper Academy. Morgan Academy played a challenging schedule and it showed in Jake Wingo’s first year. The Senators also played a bulk of their early games on the road, which is always challenging.

The playoff streak finally came to an end for the Bears, but now that it’s over hopefully people fully appreciate what Keith accomplished during those six years.

Keith won three of its last four games, giving the Bears some momentum going into next season. An 0-6 start, which included losses to county rivals Southside, Selma and Ellwood Christian, was just too much to overcome.