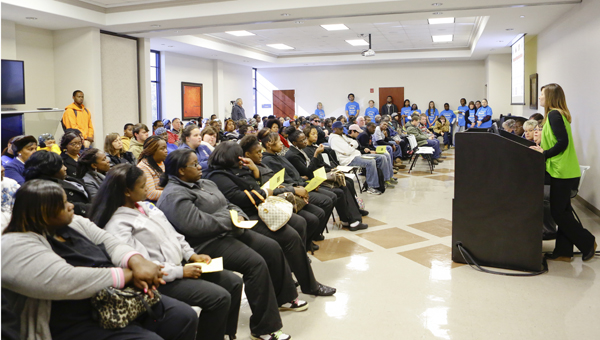 Barbara Etheridge, emergency preparedness coordinator with the Alabama Department of Public Health, speaks to a full room of guests during a forum Tuesday at Wallace Community College Selma.

Disasters, natural and man-made, are going to happen.

To help people be better prepared when disaster does strike, Phi Theta Kappa Honor Society at Wallace Community College Selma teamed up with local emergency responders to put on a forum Tuesday.

“It’s important at any level, at any age for preparedness,” said Rhonda Abbott, emergency management director and a speaker at the event. “Preparedness does save lives, and it’s important.”

The event, hosted at Wallace, had a better turnout than organizers expected. They ran out of seats and even had guests lining the walls to hear the speakers.

During the forum, guests were able to hear from Barbara Etheridge, an emergency preparedness coordinator for the Alabama Department of Public Health. She spoke about how to be prepared for all types of disasters.

After that, people were encouraged to learn basic injury and disease prevention and have a family response plan and emergency supply kit.

“I think that any time you can inform somebody to be prepared it is a good idea,” Etheridge said.

Etheridge said that if there was one thing that everyone should take away from her speech it would be to plan.

It was a common theme for all the speakers.

“No one’s together during the course of the day anymore, everybody goes different directions,” Abbott said. “But if you’ve got that plan in place then even your children have a concept of preparedness, and if they have to hunker down at school, it takes away some of the fear because they know what’s going on.”

The Selma Fire Department’s Sparky costume has been found but is too damaged to be used. The Selma Police Department... read more