Officers honored for decades of service 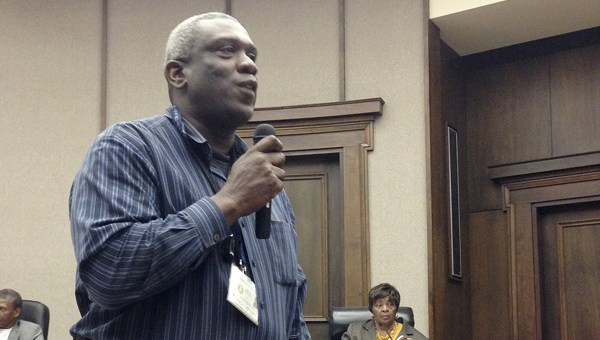 Lt. Johnny King has been with the Selma Police Department for almost three decades. He works now as the Internal Affairs Division commander.

The Selma City Council set aside a moment during its latest meeting to honor Selma officials who have dedicated decades to protecting the city.

The Selma Police Department’s Lt. Johnny King and Detective Beauty Benjamin were awarded pins and certificates for their terms of service with the agency.

The city recognizes its city employees at least every five years, according to Selma Police Chief William T. Riley.

King has served with the Selma Police Department for 27 years, while Benjamin has served for 15, Riley said.

“They have spent a long time in this profession, and the profession is not for the faint of hearts,” Riley said. “I’m very honored to see a officer spend that much time in an organization, because the trend in policing now is that people stay three, four or five years in one agency and jump to another.”

King, who serves as the Internal Affairs Division commander, said he appreciated the residents for allowing him to protect them for years.

“I stayed around for a long time, because I love what I do and working with the people,” King, who Riley described as dedicated, said. “It’s the only job I’ve ever had in my life.”

“These are specialized areas that everyone cannot work,” Riley said. “A lot of the officers don’t have the patience, means or the knowledge to do it. It’s not for everyone because some people can’t take it to see a child getting hurt or abused.”

There will be no shortage of locally made products at the Selma Mall’s 2014 Holiday Bazaar Dec. 6. The sale,... read more