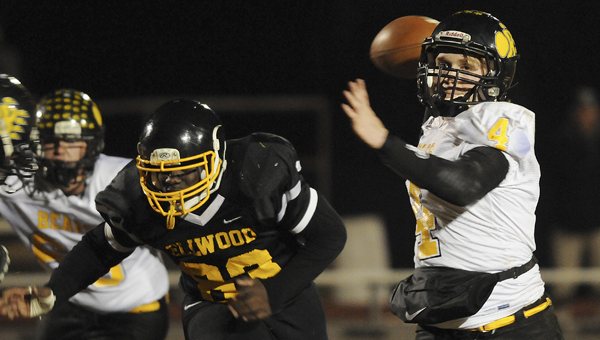 Billingsley’s Thomas Nichols, right, throws a pass in front of Ja’Derius Childs in Friday night’s game at Memorial Stadium. Nichols and the Bears defeated the the Eagles 72-12 Friday night to advance to the second round of the 1A playoffs–Daniel Evans

Neither the cold nor the Ellwood Christian defense could slow Billingsley Friday night, as the Bears ran through, around and over the Eagles for a dominant 72-12 win Friday night at Memorial Stadium.

The Eagles (5-7) were unable to find an answer for Billingsley’s Derrick Dunigan and Jaytarius Steele, who combined for six touchdowns, and saw their season come to an end in the second round of the class 1A playoffs. It obviously wasn’t the way Ellwood hoped its season would come to a close, especially one that saw the school host its first AHSAA high school playoff game.

“The last couple games of the season went 2-1 and we won our first opening round playoff game and we just tried to keep the momentum going,” Ellwood Christian head coach Eric Martinear said. “Biillingsley stopped that momentum tonight.”

The Bears (9-2) scored the game’s first 26 points, with three of the touchdowns coming on runs by Dunigan, to put Ellwood in a big hole early.

Ellwood Christian head coach Eric Martinear said his team was so worried about the cold weather — temperatures were near freezing at kickoff — that they couldn’t focus on football.

“It seems like when we stepped off the bus at the stadium and they came out here and saw that heater, all they could think about was being cold,” Martinear said, pointing at a portable heater behind his team’s bench. “They just didn’t execute.”

The cold didn’t seem to phase the Bears.

Ellwood had a chance to get back in the game late in the first half.

The Eagles successfully drove the ball down the field three consecutive times inside the Billingsley red zone.

The first of those drives ended when Rayford Mitchell fumbled as he crossed the goal line, which Billingsley recovered in the end zone for a touch back. The following two drives closed with Ellwood Christian touchdowns, both on throws from quarterback Jalen Furlow to Michael Lewis. Ellwood pulled within 26-12 with 46.6 seconds left in the second quarter and the Eagles, who would get the ball to begin the second half, seemed poised to carry momentum into the locker room.

That all changed on one play.

Steele returned the ensuing kickoff inside the Ellwood 20-yard-line. Three plays later Dunigan scored his fourth touchdown of the half to make it 32-12 Bears at the break.

“The kickoff return allowed us to get a score right before half and kind of got the momentum back, and we carried that in the second half,” McLean said.

Billingsley kept the momentum rolling in the second half. Following a failed fake punt by the Eagles, Steele scored on an 8-yard run with 9:31 left in the third quarter to extend the Bears’ lead to 40-12.

Billingsley appeared poised to add to its lead on its next drive, moving the ball inside the Eagles’ 15-yard-line, but Quashun Thigpen picked up a fumbled exchange and ran it back to the Billingsley 45. Again with a chance to get back in the game, Ellwood sputtered again.

Furlow was intercepted by Thomas Nichols, who ran it back 62 yards for a touchdown to put Billingsley on top 46-12. Nichols threw the next Billingsley touchdown, a 12-yard pass to Dalton Davis to put the Bears up 52-12 with 34.1 seconds left to play in the third quarter.

The Bears added three more touchdowns in the fourth quarter, two of them coming as a direct result of Eagles’ turnovers. Mitchell fumbled a kickoff setting up a touchdown run by Javon Brown and Furlow was intercepted, setting James Woods up for a 5-yard score.

Billingsley will host Brantley (12-0) next week in the quarterfinals of the Class 1A playoffs.