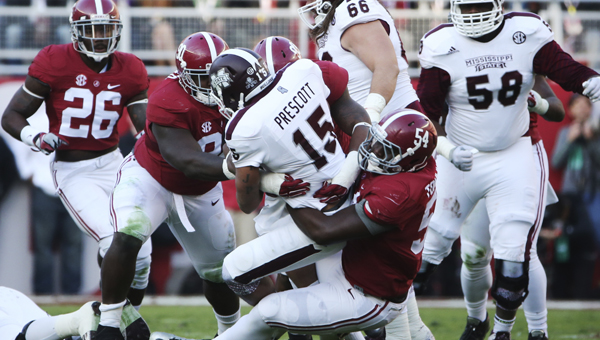 TUSCALOOSA — For the second straight week, Alabama’s season was on the line in the closing minutes on a national stage. Once again Blake Sims and the Crimson Tide offense delivered when it mattered most.

Sims, who moved Alabama down the field for a game tying field goal in Baton Rouge last week, led the Crimson Tide on a 15-play, back breaking drive Saturday that stymied Mississippi State’s momentum and helped Alabama get some breathing room in a 25-20 victory over top-ranked Mississippi State.

“That was probably one of the greatest drives in Alabama history to go down there and make it a two score game in the fourth quarter,” said Crimson Tide head coach Nick Saban.

Twice on the drive Sims scrambled for key third down conversions to keep the chains moving. T.J. Yeldon, who sprained his ankle last week against LSU and whose status was in doubt most of the week, closed the drive with a 7-yard run to the delight of the Crimson Tide faithful, who saw Alabama seize control of its SEC championship and national title hopes in one of the biggest games of the year.

“I think any time you beat the No. 1 team in the country, that’s a significant accomplishment,” Saban said. “I was really proud with how our players competed in the game.”

It was going to take a near perfect performance for the Bulldogs to leave Tuscaloosa with their unblemished record intact and Mississippi State was far from it Saturday.

The fifth-ranked Crimson Tide intercepted Heisman Trophy contender Dak Prescott three times — including twice in the red zone — and scored the game’s first 19 points to take a commanding lead that Mississippi State could not overcome.

“We turned over the ball,” said Bulldogs coach Dan Mullen. “It was just stupid turnovers.”

Backed by a raucous home crowd, Alabama started with a flurry, but had to hang on after the Bulldogs scored 13 consecutive points to pull within one score early in the fourth quarter.

With the Alabama offense virtually non-existent in the third quarter, it looked like the Crimson Tide might be in trouble, but that wasn’t the case.

Like last week at LSU, when Alabama drove 55 yards in the final 47 seconds to tie the game, the Crimson Tide rallied together when they had to have it.

“We made big-time plays at the right time and the guys fought hard,” Sims said. “the defense made a great stand for us to have that drive. I’m just proud of the way that the whole team played.”

After a JK Scott punt pinned Mississippi State against its own end zone, Tre DePriest pummeled Bulldogs’ running back Josh Robinson — who appeared to run backwards — for a safety with 7:49 remaining in the opening quarter.

“He should’ve kept it inside, but he tried to bounce it outside to make a play,” Mullen said. “The guys are just trying to make big plays out there on the field in big games, which you don’t have any problems with.”

Scott kept the Bulldogs backed up the entire first half, leaving Mississippi State starting inside its own 25-yard line on all seven possessions and the counter effect showed on the scoreboard.

Alabama’s following drive stalled inside the Bulldogs’ 20-yard line, leading to a 36-yard field goal by Adam Griffith to make it 5-0.

With the Mississippi State offense struggling to find consistency — the Bulldogs had just 25 yards in the first quarter — Alabama kept clicking offensively. A poor, 37-yard punt by Logan Crooke gave the Crimson Tide possession at the Mississippi State 39-yard line. Six plays later, Alabama took advantage as Sims connected with Amari Cooper for a 4-yard touchdown pass to make it 12-0 Crimson Tide with 7:45 left in the second quarter.

It didn’t take long for Cooper to strike again.

After Mississippi State’s third three-and-out of the first half, the big play receiver hauled in a 50-yard pass to set Alabama up at the Bulldogs 1-yard line. Derrick Henry did the rest, forcing his way into the end zone on a play that was originally ruled a fumble, but was overturned by replay.

Mississippi State’s offense found some life on a 14-play drive to end the first half, but a false start penalty after reaching the Alabama 1-yard line cost the Bulldogs dearly. With time waning, Mississippi State was forced to pass and had to settle for an Evan Sobiesk 23-yard field goal to close the half down 19-3.

Mississippi State found momentum in the second half and opened up with an impressive opening drive. But it was the same old story for the Bulldogs, who reached the Alabama 14-yard line but had to settle for a 32-yard field goal by Sobiesk to pull within 19-6.

After three-and-outs by both teams and a missed 37-yard field goal from Griffith, Mississippi State drove into Alabama territory again. On a 10-play drive that saw Prescott run or pass on every play but one, the Bulldogs reached the Alabama 14-yard line. Once again, that’s where it ended for the Bulldogs, as Jones intercepted Prescott’s pass in the end zone for a touchback.

“I just tried to get my guy cut off, and I turned around and the ball was coming,” Jones said. “I was just trying to make a play.”

Mississippi State would finally strike again, as Prescott found Ross for a score to make it 19-13 with 14:16 left to play.

After Alabama took a 25-13 lead and failed on an attempted two-point try, Mississippi State drove into scoring range again. The drive ended when Prescott’s pass was tipped and intercepted by Landon Collins at the Alabama 15 with 5:01 remaining.

After an ultra-conservative drive by the Crimson Tide took several minutes off the clock, Mississippi State got the ball back and scored on a 4-yard Prescott pass to Jameon Lewis with 0:15 left to play. Alabama recovered the onside kick, putting any thoughts of a miracle rally to sleep.

Sims had an ultra efficient day, completing 19 of 31 passes for 211 yards and a score. He also added 25 rushing yards.

Alabama will play Western Carolina next week, while Mississippi State will host Vanderbilt.