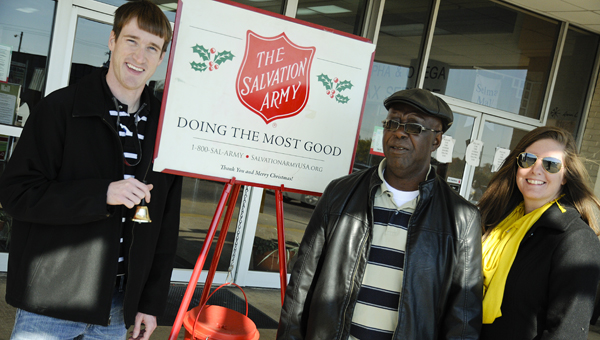 Bells have started ringing across town as the Salvation Army kicks off its 2014 Red Kettle Campaign.

This year’s campaign officially started Friday in front of the Selma Mall and will run through Christmas Eve.

All the money raised will help local families in Dallas and surrounding counties.

“This is to go to help people with Christmas who have already applied,” said Mary Welch, with the Salvation Army.

The kickoff event at the Selma Mall included a brass quartet playing Christmas carols in the chilly weather.

Bell ringers will volunteer from approximately 10 a.m. to 6 p.m. at several stores across Selma.

These include the main entrance of Selma Mall, both Winn Dixie stores, Walgreens and Dave’s Market. They will start at Walmart after Thanksgiving.

Anyone wanting to volunteer as a bell ringer should contact former Selma fire chief Henry Allen at 407-8746.

D’Asia Lewis, a sophomore at Selma High School, takes a photo with her uncle Ty Nasion, after the two signed... read more