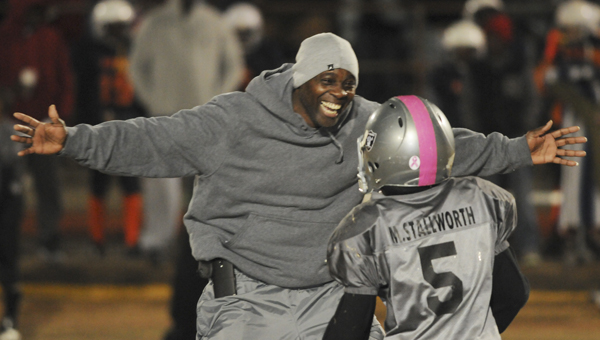 The Raiders used a safety, one long touchdown run and a stingy defense to shutout the Dolphins 8-0 Thursday night at Memorial Stadium to win the 7, 8, 9 and 10-year-old youth football championship.

“We are very proud of them,” Raiders assistant coach Barry Frison said. “… We didn’t get first place [in the regular season] like we thought we would and we lost two games that we shouldn’t. Then the only two teams to beat us this year, we beat them in the playoffs.”

Only the Dolphins and Seahawks — the top two seeds — had defeated the Raiders this season.

Wednesday and Thursday night, the Raiders proved they are playing better at the right time of the year by beating them both.

Thursday’s game was still tied late in the first half when the Raiders threatened to take the lead by moving the ball inside the Dolphins red zone. Backed up against their own end, the Dolphins’ held on downs and celebrated a big stop that kept the game tied.

Two plays later, Dolphins quarterback Jaylen Sellers was tackled in the end zone for a safety, giving the Raiders a 2-0 lead with just under five minutes remaining in the second quarter.

“That changed the game,” Raiders head coach Alvin Barnett said. “We were on the 2-yard line and fumbled the ball, but after we got that safety we knew nothing could stop them. The turnover we had just committed, we got it back.”

The game remained scoreless going into the second half, but the Raiders struck quickly. Markeice Stallworth Jr. took the first play of the third quarter 60-yards for a score to give the Raiders an 8-0 lead.

“The first play [of the second half], the run kind of shook them up a little bit,” Barnett said. “It kind of broke their back. We knew they couldn’t stop the run.”

The Dolphins’ had a potential game tying drive stopped with a fumble on fourth down by quarterback Marquavious Pullom, who was hit hard by the Raiders’ defenders on a failed quarterback sneak.

The Bobcats capitalized on early mistakes by the Rams and then held on for a 16-12 victory Friday night in... read more