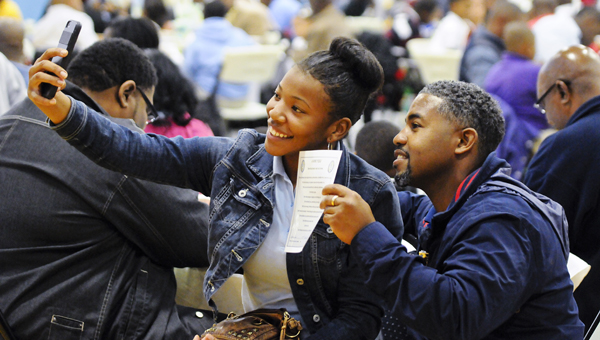 D’Asia Lewis, a sophomore at Selma High School, takes a photo with her uncle Ty Nasion, after the two signed a pledge saying Nasion would always be involved in his niece’s life. More than 200 fathers, grandfathers, uncles, brothers and mentors took part in the luncheon at Selma High School.

The 100 Men Luncheon will have to come with a new name next year.

That’s because double that many fathers, grandfathers, uncles, big brothers and mentors went to Selma High School Thursday to support students in their lives.

The lunch highlighted the importance positive male role models have on young people.

Organizers scrambled to find additional tables and chairs for the overflowing crowd.

“What a great problem to have. We are so excited about today’s event,” said acting Selma City Schools Superintendent Larry DiChiara. “The result is clear — children thrive when men are involved in their lives.”

George Tarver Sr. came to the lunch with his son, George Jr., a fifth grader at Meadowview Elementary.

“It’s a great day to be here with him during the school day,” said Tarver, who works as a maintenance supervisor with the school system. “It’s just a good environment for men to get together with their children. And that’s what’s needed.”

The younger Tarver was proud to have his dad with him for lunch.

“It feels good, because sometimes the other kids don’t have dads,” Tarver said.

Quenton Marshall and James Perkins Jr. both gave speeches about fatherhood and mentoring.

All the men also signed a pledge that they will be there to encourage, engage and challenge their students.

Selma High School won a trophy for having the most men present for lunch. By then, 191 guests had registered with more still coming in the door.

“I never expected to see so many folks,” said Ty Nasion, who came with his niece D’Asia Lewis, a sophomore at Selma.

sign me up: Sharon Jackson signs a copy of her book “Images of America: Selma.” She is shown at the... read more