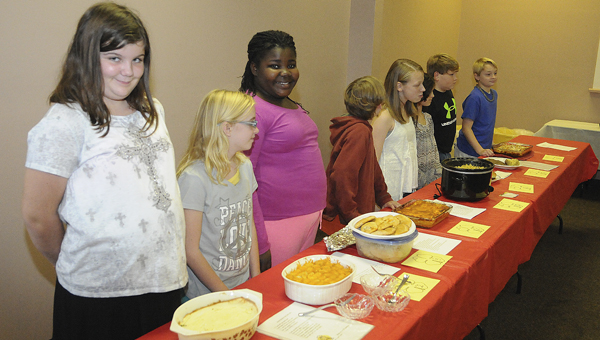 Students participating in the Junior and Senior High Beef Cook-Off competition Wednesday at the Central Alabama Farmer’s Co-Op stand in front of their dish before the competition gets underway. –Daniel Evans

The aroma of freshly cooked meals filled the air at the Central Alabama Farmer’s Co-Op on Tuesday, as students took part in the Junior and Senior High Beef Cook Off.

The nine students in the competition were tasked with preparing a dish that included one to five pounds of beef, and they did not disappoint.

Among the dishes entered were Beef Stroganoff, a No Mess Sloppy Joe, Tater Tot Casserole and Sloppy Honey BBQ Burgers, but none of those could top Acadia Thomas’ Balsamic Roast Beef Recipe.

Thomas, who entered the contest the last two years but did not win, said it was encouraging to finally break through.

“It sends the message of perseverance will you help you get anything done in life if you keep trying,” Thomas said. “Every year you might get better and better at it, so don’t give up.”

Thomas’ recipe, which is eligible to move on to the state competition in Montgomery in January, included brown sugar, honey and soy sauce among other ingredients to give the roast beef a very distinct flavor. The meat was then placed on hoagie rolls, creating an easy to eat sandwich.

“Eventually it turned out right.”

“A lot of them will make a family favorite dish, but then you will have some kids that really start to be adventuresome, and you’d be amazed at how many kids tell me they watch the cooking channel and the Food Network.”

Each of the top three finishes won a ribbon and a cash prize. Each contestant had to bring two copies of their recipe for the judges to review.

Each recipe was judged on a scale of 100 points, with appearance and taste factoring in the most.