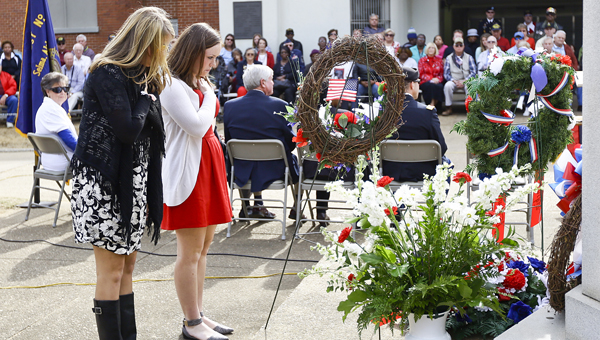 Attending the Veterans Day program at Memorial Stadium has been a tradition for some and, after Tuesday, will become one for others.

On the 11th hour of the 11th day of the 11th month, people put aside their differences to come together and honor the men and women who have put their lives on the line to serve the country.

Many gathered together Tuesday to give their thanks had their own experiences and reasons for being at attention.

“It’s just very, very special,” said Kathy Gordon, a member of Messenger of the Cross Motorcycle Ministry. “My daddy was in World War II, so that’s really what got me started coming to the events. He’s gone on now, but it’s just very special.” 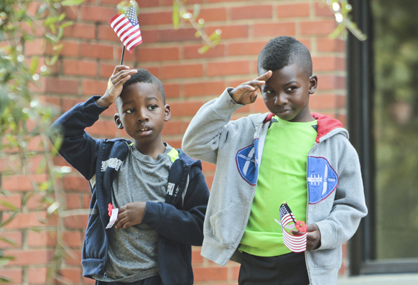 Rashad and Rodney Thomas salute the flag during the Veterans Day program Tuesday at Memorial Stadium in Selma.

Gordon was part of several motorcycles that rode through the program to present the colors to the Southside High School JROTC students.

“I hope what it means to [the students] is that they have a better appreciation of how important our freedom is to us and how many people have sacrificed to protect their freedoms that they enjoy,” said retired Air Force Lieutenant Colonel Steve Ruiz, JROTC teacher. “That’s not something that you have in every other country, and hopefully they appreciate that a lot more by just seeing what these people have done for them.”

Ruiz said he hopes his students have a true understanding of what veterans have done for the country.

“[I hope they] appreciate the heritage and history that our veterans have given to our country over the years,” Ruiz said. “That’s one of the things we try to instill upon them is there is a lot of people that have gone before them, and we’re basically standing on their shoulders.” 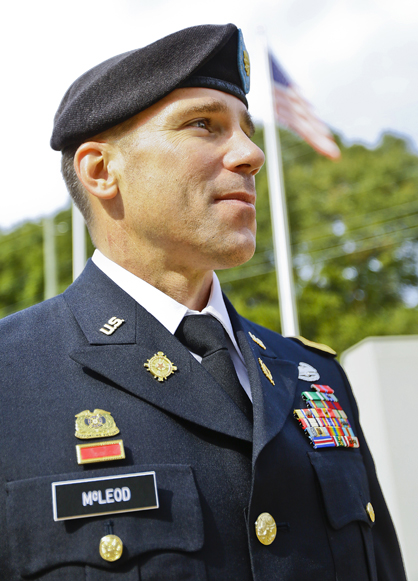 Major Gary McLeod of The National Guard takes a moment to pose in front of an American flag after speaking during the Veterans Day Program.

For some that attended the program, it was an eye opening experience.

Craig Long, an Army veteran, said he remembers back in the 1960s when there were anti-war protestors and things were a lot different than they are now.

“I’m glad it’s a lot better than before. It took me a long time to forget about it,” Long said. “I didn’t put on military stuff for about 20 years, until I met a veteran that said you should wear your badges and awards — so I started to wear them again.”

Long said he had not attended a veterans program until Tuesday, and he is very grateful that he did.

“This is my first event. I have never been to one. I felt like an outsider because of my service,” Long said. “I appreciate everything now. I still have people saying welcome home to me today. It’s never too late for that ‘thank you.’”

Long’s aunt called him Tuesday morning to ask if he was going to the program, but Long told her that he wasn’t feeling well and didn’t think he would make it. After her persuasion, Long finally decided to take the step and make his debut at the program.

“This is a relief for me. I’m glad she called me and got me out of bed, because it was real nice,” Long said. “I won’t miss another one. I’m going to go every year. I’ve got to, and I owe it to the men serving now and the men in the past.”

After ultimately going to his first program, Long said he will do whatever it takes to go to every program.