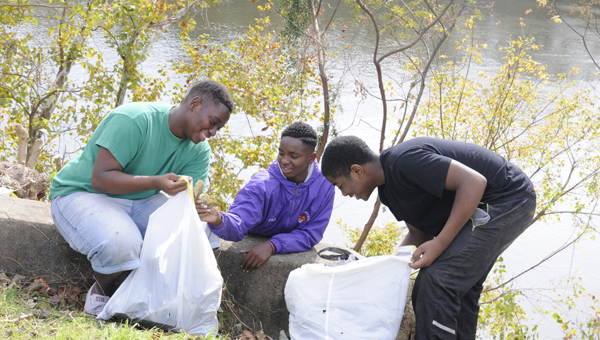 Selma City Schools being closed Tuesday didn’t stop members of the Bulldog Brotherhood from putting in a hard day’s work.

The R.B. Hudson mentoring group spent the morning cleaning the hill at the end of Water Avenue between Selma’s Masonic Lodge and Safelite AutoGlass buildings. The community service was the first of many the group plans to complete this school year.

“We’re trying to teach them what’s important in life,” said Colin McConarty, a R.B. Hudson assistant baseball coach who sponsors the group. “We really want to make it so we’re giving back to the community today, so we can all feel part of a group and feel part of the community, too.”

The young men worked as a team to make the area near the Alabama River appear more presentable by removing trash and clearing tree limbs.

McConarty and Marcus West, head baseball coach at RB Hudson and Bulldog Brotherhood sponsor, encouraged the boys as they worked.

For McConarty, the task allowed the students to learn from one another.

“They are developing their own teaching ability and their own leadership ability in a way that they don’t often get to, especially since a lot of the kids who are with the program today aren’t involved in a lot of other extracurricular activities,” McConarty said.

West said he expects the members to show the younger generation how to invest their time and effort into improving Selma.

“Hopefully, it will teach them to teach others who are younger than them to get out here and do the same thing to make a difference in the community,” McConarty said.

Bulldog Brotherhood member Jaelon Williams, an eight grader, said he was eager to make a positive change in the area.

Williams said being a part of a group felt good.

“[Seeing litter] makes me feel bad, because it makes our city look nasty,” Williams said. “We’ve got to try to help that by picking up trash and recycling.”

Bulldog Brotherhood has plans to continue serving others throughout the year by contributing to Operation Christmas Child, conducting canned food drives, visiting nursing homes and more.

West has high hopes that the new group will continue for years to come and show the public a representation of how a school should act.

“Hopefully, this will be around for the next 20 years,” West said. “We’re trying to bring a lot of positive attention to R.B. Hudson. We’re trying to be a model school.”