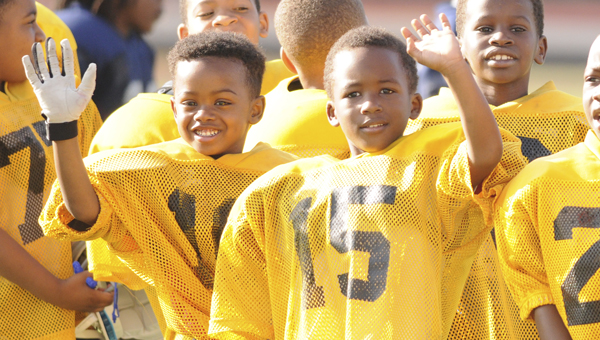 Players for the Bears wave at Memorial Stadium earlier this season. Soon the youth football season will be over, as all three championship games will be played Thursday night. –File Photo

The Eagles win Friday over J.U. Blacksher set up the school’s first home playoff game this upcoming Friday at Memorial Stadium against Billingsley. That created a small problem, because the stadium was set to host youth football championship games Friday night.

Instead, all three of the championship games will be played Thursday, as the organizers adjusted the schedule in a hurry. Selma recreation department football director Terry Jackson said he has never had to adjust the playoff schedule because of a high school playoff game.

“This is the first time it has happened,” Jackson. “I found out Saturday [Ellwood had won]… I said ‘Oh my goodness I’ve got to go in and make some adjustments now.’”

It ended up working out just fine. With the players out of school Tuesday for Veterans Day, Jackson was able to double up the schedule and start games at 4 p.m. instead of the regular time of 4:45 p.m. The schedule change will test the champions though, as many teams could have to play three straight days.

“We have accommodated the other schools when they have to play a Thursday night game or a middle school game, but this is the first time I can remember us having to reschedule the youth games for a playoff game,” Selma Recreation director Elton Reece said.

Jackson said it has been a tremendous season for the youth league, which had the most teams it has ever had.

“All the coaches have been good, the parents have been nice and we didn’t have that many children drop off,” Jackson said. “Win or lose, most of them stayed this year.”

The league will also have games Saturday when they hold their jamboree bowl games.

Saturday’s games will start at 9 a.m. and throughout the day the recreation department will present trophies to the teams. The games will last most of the afternoon at Memorial Stadium.

From Staff Reports The Selma Times-Journal   The cover vote for the 2014 Hoopla magazine will kick off Wednesday at... read more