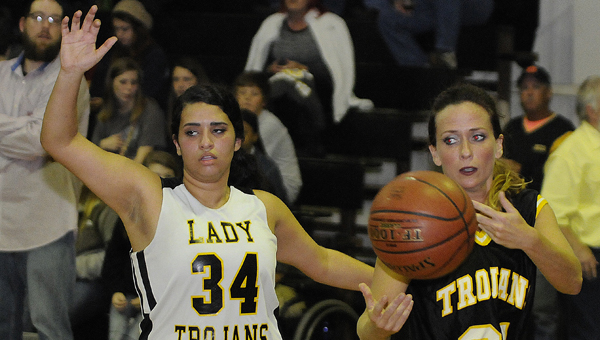 Meadowview Christian held its annual “Old School, New School” basketball game Friday night, giving some of the school’s alumni a chance to show those on the current teams that they can still play the game.

The Trojans’ gym was packed as alumni came to watch old friends and current students battle on the court.

The alumni team even had an alumni cheerleading squad, filled with former students that cheered when they were Lady Trojans.

“It’s been a great event,” said alumnus Ginger Spann. “I played last year and was excited when I heard they were having it again, so it’s been a good event for the school.”

Spann, a Meadowview graduate of the class of 1997, said her favorite part of the game is that got she got to see former classmates that she doesn’t run into very often, but she also likes to measure herself on the court against the team of current Lady Trojans.

“I scored three points, so I was proud of myself,” Spann said with a laugh.

“[I wanted to beat them] very badly,” Claudia said. “I actually got aggressive with my mother because that’s the only time I get to be rough on her.”

Traci admitted she wanted to win too, but found herself cheering when both teams made shots.

“It’s a lot of fun to come back, but it’s especially fun to get to play against your daughter,” Traci said.

Next year, after Claudia graduates, she will be able to team up with Traci and Kelli in the alumni game, something she is excited for.

The Trojans’ boys team also played against a team full of former players Friday night in the same format.

Meadowview will officially open its basketball season at home against Tabernacle Christian Friday night. The games are scheduled to start at 5 p.m.